The Authentic Sports Autograph Company released their first single-player set in 1982, featuring 72 cards of Yankee hero Mickey Mantle (several others were to follow, featuring retired star players). A total of 20,000 sets were produced according to the company, with 5,000 of the sets containing a hand-signed autograph by Mantle on card number one. The cards basically chronicle Mantle's life from his rookie year of 1951 through his appearance at the Yankees Old-Timers Game in 1981, and many of the photos used for the set were provided by Mantle himself. The original retail price for an autographed set was $24.99, while an unsigned set could be purchased for $12.99.

Of the 20,000 total sets that were produced (according to the manufacturer), 5,000 of these sets featured a header card personally autographed by Mantle. Please note that ALL sets feature a facsimile Mantle autograph on card number 21, which looks like this: 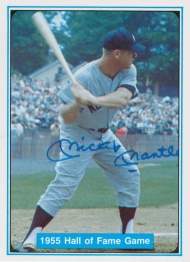 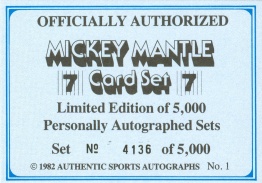 Like other 1980s sets that are somewhat hard to find today, prices vary when a set becomes available for sale or auction. We believe an unautographed set (red backs) has a fair market value of $35 to $40, while an autographed set (blue backs) can easily sell for $120 or higher. Given the continuing popularity of Mantle, and the large number of forged Mantle signatures that litter the hobby today, the autographed version of this 1982 A.S.A. set is highly prized by collectors.


OK now... After understanding that ASA produced 5,000 autographed Mantle sets with blue backs, and 15,000 unautographed sets with red backs, we have a startling revelation to make...

Mantle DID NOT autograph 5,000 sets! That's right kids, we have seen at least three examples of blue-backed sets that are not autographed -- as a matter of fact, we own one. See the certificate shown above for set number 4,136 of 5,000? It is tucked safely in our collection, in all it's autograph-free glory. Here's a front scan of card number one, the header card that should feature the signature: 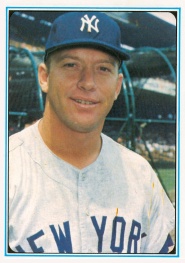 The other examples of unautographed blue-backed sets were listed on a popular internet auction site and featured serial numbers 3,839 and 4,568 (we are not actively looking for more examples...) One does have to wonder though... How many sets did Mantle actually sign? 3,000? 4,000? 4,997? 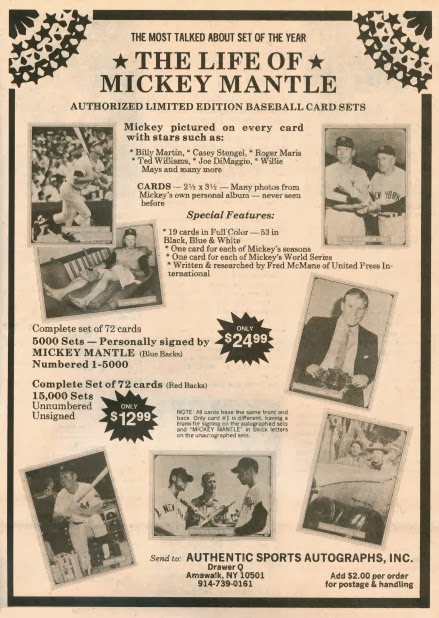