Twelve Charlotte Hornets players were the subjects of a unique "standups" promotion issued during the 1992-93 NBA season. 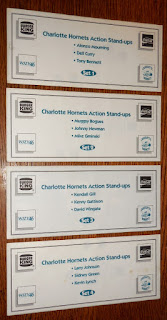 Each standup was printed on medium-weight cardstock and perforated around the general shape of the player it pictured. The half-oval "stand" for each player is also perforated on one of the sides. As you've probably guessed by now, the idea was to display the players on a flat surface by removing the excess card backgrounds along their perforations, then using the stand piece to keep these upright.

The promotion was released at a good time, as Charlotte was excited about the potential of their hometown ballers in 1992. Rookie center Alonzo Mourning was drafted by the Hornets, being picked second overall after some dude nicknamed Shaq who went to Orlando. Adding Mourning to a roster that already included Larry Johnson (who had been drafted 1st overall the year before) and Muggsy Bogues (an overachiever who had been a Charlotte fan-favorite since the club first played in 1988) caused fans to pour into the Charlotte Coliseum. Kendall Gill and Dell Curry rounded out the five players that played the most minutes that year for Charlotte, and by season's end the Hornets found themselves in the playoffs for the first time in their five year history. Though the Hornets beat a surprised Celtics team in the Eastern Conference First Round, the Knicks would prove to be too much to handle in the Eastern Conference Finals, where Charlotte was downed four games to one.

All five players mentioned above are included in the standups set, with the rookie-year Mourning being the most valuable by far. This type of perforated card had been released before in past years and in other places, typically for promotions just as obscure as this one. Due to these being a regional oddball offering, and with cards a size much larger than the standard issue (these standups measure a whopping 4 inches across by 8 7/8 inches tall), the set was pretty much destined to be off the radar of most basketball collectors from the beginning.

While I don't believe these cards to be truly scarce, they do seem to have gone into hiding; one doesn't find these all too often on the internet auction sites. When looking for a set, it would be advisable to find the cards still in their original envelopes and the perforations need to be fully intact to maintain their value. I believe a complete set with envelopes should be valued in the $20 range today, and this oddball gem provides an interesting alternative to the millions of mainstream cards that were produced during the peak of the basketball junk wax era. 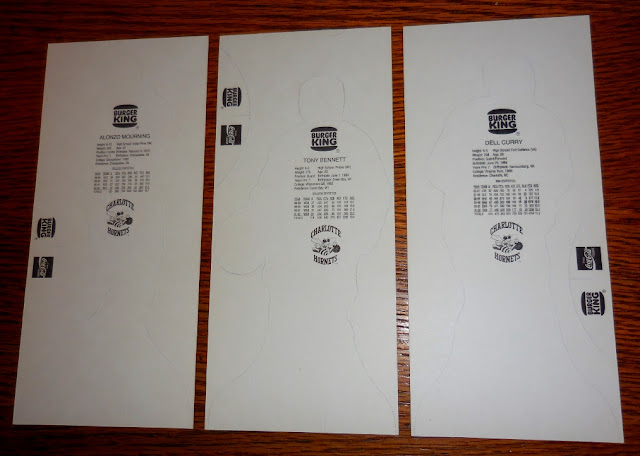 Consisting of 17 cards total, the set follows the general format used by other NFL police sets since 1979; e.g., large color action photos on the fronts and a taller card size than the standard national issues. These police cards measure approx. 4 1/8 inches tall by 2 5/8 inches wide, and were printed on soft white cardstock.

The cards were distributed throughout the '83 football season by local Minnesota police officers and sheriff's deputies. According to the card backs, the set was sponsored by the state Neighborhood Watch (M.C.P.O.A.), Pillsbury and Burger King. Their respective logos are found on the backs, along with player biographies and a crime prevention tip. Each card is also numbered on the back.

Let's compare this police set to the Topps football set released during the same season. In their 1983 football release, which contains a total of 396 cards, The Topps Company featured just 12 Vikings cards within the set. To make matters worse, each of these cards featured the typical 1980s Topps "bench shot" photos that were unappealing to young collectors. An action packed Vikings police set was just what the doctor ordered, and several notable names emerged as an added bonus. Hall of Fame head coach Bud Grant, who had never been featured on a mainstream card, makes an overdue appearance at the end of his career with the club (he would coach the Vikings one final season in 1985). Guard Jim Hough played nine seasons with Minnesota and was never featured on a Topps card. 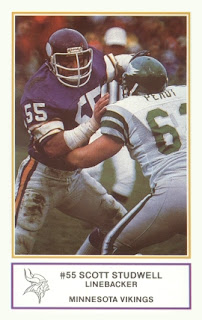 Topps really dropped the ball with two other Vikings legends. Defensive back Joey Browner was drafted by Minnesota in the first round of the 1983 NFL Draft, and went on to play in six Pro Bowls; in addition, he was named to the NFL 1980s All-Decade Team. While he appears in the '83 Vikings police set (in an early training camp photo), Topps would not issue Browner's true rookie card until the release of their 1986 set. Perhaps even worse was Topps' treatment of linebacker Scott Studwell, who was drafted by the Vikings back in 1977 and became a starter in 1980. Incredibly, Studwell would not be given a Topps rookie card until 1988, his twelfth season in the league! His '83 police card pays him his due respect by showing him in action against Eagles lineman Petey Perot, and even mentions his winning the NFL arm wrestling championship on the back of the card. Both Browner and Studwell are members of the Vikings Ring of Honor, as well as the 50 Greatest Vikings team chosen in 2010.


The club continued to release yearly police sets into the new millennium, though the old method of police officers giving away a couple of cards at a time eventually fell by the wayside. The inaugural 1983 set isn't too awfully hard to find and has a current value in the $7 to $10 range.

For a comparison, here's a peek at how the Dallas Cowboys police card set looked in 1983.


Random Fact: The last card of every Vikings police set released from 1983 through 1989 features an "All Time Great" player. Hall of Fame quarterback Fran Tarkenton occupies the slot in the 1983 issue, and at the time held the NFL all-time records for attempts, completions, career passing yards and touchdown throws.

Click here to hunt for Vikings Police Sets on eBay

Posted by Anthony Nunez at 8:36 PM No comments: