Twelve player cards comprise the 1989/90 Nuggets police set. Large game-action photos of the players in their white jerseys account for the majority of the card fronts. A vertical white bar on the right side of the front featured the player's name and uniform number, and three color sponsor logos are lined horizontally across the bottom (Denver Nuggets, Pepsi and 7-Eleven). Card backs contain a safety tip and contact info for the Denver Children's Hospital, all printed in blue. Cards are not numbered except for uniform numbers and the year of issue is not mentioned. Stars Alex English and Walter Davis are the key cards in the set.

The 1989/90 Nuggets police issue seems to be easier to find than the older Denver sets. A fair current value is in the $2 to $4 range.

The Twins released a 36-card postcard set in 1983 featuring players, coaches, the Metrodome, and combo cards. Park Press Inc. of Waite Park, Minnesota produced both the postcard set and a regular card-sized team issue for the Twins. Both of these sets contain the same exact lineup of players, coaches, combo cards and Metrodome card -- but the biggest difference (apart from the obvious large versus small size) is that different photos were used for most of cards. Most single player and coach cards in the postcard set have a facsimile autograph on the front, with the two exceptions being Tom Brunansky and Pete Filson. These postcards are not numbered.

Dodgers legend Johnny Podres, who is featured in the set, was the pitching coach for the Twins from 1981-85. He was the World Series MVP in 1955, the only year the Brooklyn Dodgers won the Series.

Sets originally retailed for $5 at the Metrodome and through the Twins mail order catalog, and came shrink-wrapped in clear plastic. Today, the set can usually be found in the $4 to $7 range.

Posted by Anthony Nunez at 1:19 AM No comments:

While the inaugural 1985 Donruss Highlights set is probably the most controversial set of the decade (too few sets were printed to fulfill dealer orders), the 1986 edition of the set was released in quantities abundant enough to make everyone happy. Once again consisting of 56 cards, the set has a design similar to the regular 1986 issue, with the biggest difference being gold/yellow borders instead of blue borders on card fronts. In addition, the year-end boxed set has a "Highlights" logo near the bottom left of each player card. Each set was issued in a blue box with gold foil stamping, and also includes a Hank Aaron puzzle the size of a standard card. Released near the end of 1986, the set sold in the $9 to $12 upon its release. Today, an unopened complete set can usually be found in the $2 to $4 range. 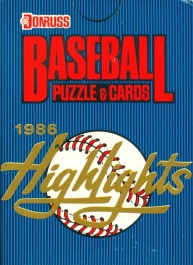 Several players can be found on more than one card, with set-hog Roger Clemens appearing on five. Donruss capitalized on several hot rookies from the 1986 season, including Bo Jackson, Will Clark and Wally Joyner. 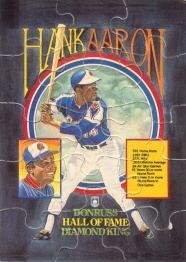 If these don't seem to be the cards you're searching for, check out our post on the 1984 Buccaneers Police Set. The 1984 cards do NOT have Coca-Cola or Paradyne logos on the backs.

The 1980 Bucs police set was released in two versions -- one has Coke advertising on the back, while the other has an ad from the Paradyne Corporation. Both versions are complete at 56 cards, and the card fronts are similar for both. This set is considered to be the scarcest NFL police issue of the decade (regardless of the sponsor), but since the "Paradyne" version is much scarcer than the "Coke" one, the 1980 Bucs Paradyne police set is without a doubt the toughest football safety set of the 1980s to find. There are 44 players represented in the set, as well as several cheerleaders (Swash-Buc-Lers), the head coach, owner and mascot. Card backs feature "Tips from the Buccaneers" and list the sponsors; Greater Tampa Chamber of Commerce, Law Enforcement Council, local law enforcement agencies, and either Coca-Cola or Paradyne. Many players in the set are featured on their only NFL card, including USFL standouts Mike Hawkins (Gamblers) and Chuck Fusina (Stars). 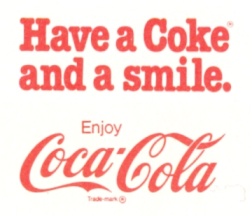 In the "Coke" version of the 1980 Bucs police set, 28 cards have the "Enjoy Coca-Cola" logo on the backs, while the other 28 have the "Have a Coke and a smile." campaign. Card backs are printed in red.

Considered the first "modern" police/safety set, the 1977/78 Blazers issue established the prototype look, size and feel for the majority of future public service giveaway sets. Consisting of fourteen cards (eleven players and three staff members), the semi-glossy fronts feature large game-day photos surrounded by thick, white borders. A Trailblazers logo can be found at the top right of the photos. Backs are white with a square red border surrounding a "Tip from the Blazers" and a basketball term. Near the bottom of card backs is an NBA logo and a line stating, "Courtesy of your area Kiwanis Club and Police Dept." Cards are not numbered except for player uniform numbers, and the year of issue is not mentioned. The majority of the 1976/77 NBA Champion squad is represented, with the key cards being early issues of Hall of Fame center Bill Walton and forward Maurice "The Enforcer" Lucas.

These cards may be a bit tougher to find than most other police sets of the era, but are certainly not scarce. A fair current value for a nice set is in the $25 to $40 range.

Herfy's hamburger restaurants in the San Jose area gave these cards away in 1975. Complete at 22 cards, little else is known about the set. Cards are not numbered and the backs are blank. Featured in the set are 20 players (Buzz Demling is the subject of two cards) and fan/mascot "Krazy George" is the only non-player (George shows up a few years later in the Tampa Rowdies police sets). The cards are quite a bit larger than the standard size, roughly measuring 5 1/4 inches tall by 3 inches wide. Soccer fans will recognize many players from the era, including Boris Bandov, Gary St. Clair and Dan Counce.

This set is quite scarce and does not come up for sale often. A good starting point value-wise would probably be in the $40 to $50 range.

The 1979 Seahawks police set was the first of nine police sets produced of the team through 1990 (none were released in 1981, 1983 or 1984). Sponsors for the 16-card inaugural issue were the Washington State Crime Prevention Association, Kiwanis Club, and Coca-Cola (all listed on card backs). A football definition and safety tip are also given on card backs, and the year "1979" appears in tiny numbers on the right bottoms below the border. Cards are not numbered. Hall of Fame wide receiver Steve Largent is the key card of the set, accounting for over half of the set's value. Fan-favorite quarterback Jim Zorn is another notable player in the set.

Seahawks police sets are not difficult to find. The 1979 issue is the most valuable because it's the oldest, and usually sells in the $8 to $10 range.

The 1979 season marked the release of the first Cowboys police set. Originally slated to be a 14-card issue, troubled player Thomas Henderson was removed from the set and replaced by fellow linebacker D.D. Lewis in the middle of distribution. Both cards were printed in lesser quantities than the others, but enough were released for both to be considered a part of a complete set. Hall of Fame quarterback Roger Staubach makes an appearance during his last year as a player, and Hall of Fame head coach Tom Landry is the subject of a card for the first time since his 1965 Philadelphia Cowboys "play card." Featuring game-day photos on the fronts, the backs gave "Cowboys Tips" and listed the sponsors (area Kiwanis Club, law enforcement agency, and the Dallas Cowboys Weekly). Cards are not numbered except for player uniform numbers.

The 1979 Cowboys set is not scarce, but was still printed in quantities modest enough to maintain a reasonable value. Today, the set can be found online in the $15 range.

The 1979 set marks the first of eleven consecutive yearly Chiefs police sets. One of the earliest NFL police sets, the 1979 Chiefs issue is complete at ten cards. The most notable card in the set features Hall of Fame coach Marv Levy, who makes his first appearance on a card here (his first nationally-issued card wasn't produced for another ten years). Players are pictured in their red jerseys and on the playing field, except for Jack Rudnay, who is in his white jersey and sitting on the bench. The cards were sponsored by Hardee's, local law enforcement agencies and the Chiefs.

The eleven Chiefs sets are among the easiest of police sets to find. With that in mind, the 1979 set seems to be the most difficult to find from the Chiefs series. The Marv Levy card enhances the desirability and value of the set, which is in the $7 to $10 range.