We know very little about this simple, but glorious, Tacoma Stars card set. What we do know are the following facts:

2. This set consists of sixteen numbered player cards and an unnumbered card that lists the locations of participating Pierce County Credit Unions.

3. Card fronts feature a posed color photo of the player, along with his name and position across the top. The Tacoma Stars team logo is pictured at the bottom. 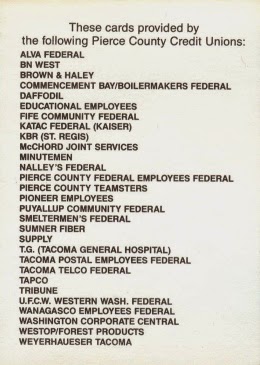 4. Card backs are all similar except for the card number, which is listed at the top right corner. Backs say, "Compliments of the Pierce County Chapter of Credit Unions who have adopted the Stars."

6. Even though there are 29 different participating Credit Unions listed on the locations card,  this damned set is really tough to find.

Lord knows what the value of this set might be. As is the case with virtually every other regional soccer release, most collectors probably have no idea this issue exists. With that being said, fans of 1980s soccer will recognize several names found within these cards. Defender Jimmy McAlister was the 1977 NASL Rookie of the Year, and earned six caps with the United States national team from 1977 though 1979. Ralph Black was a defender whose professional career spanned the years 1982 through 1999. Forward Mark Peterson had six appearances with the United States national team from 1980 through 1985, and played professionally from 1980 to 1987.

Posted by Anthony Nunez at 3:18 PM