Dozens upon dozens of Minor League Baseball prospects sets have been created over the years, and they always provide years of entertainment, as the players pictured thread their way at varying speeds though the uncertain maze towards the Majors.

The 2001 Southern League Top Prospects set, produced by Grandstand, is one typical example. Consisting of thirty player cards and a header, borderless photos and a glossy surface help to give card fronts a slick new-millennium appeal. Backs are printed in black and give player statistics for the 2000 season, as well as Minor League totals. Surprisingly, the cards are not numbered except for player uniform numbers. 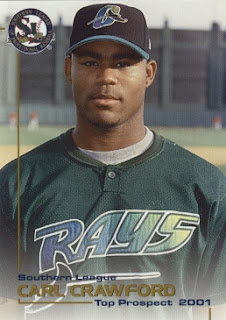 Being an AA league, a large percentage of these prospects saw time in the Majors. As always, some of the players "missed it by that much," while others went on to enjoy All-Star seasons (Josh Hamilton, Adam Dunn, Carl Crawford and Felipe Lopez each received the latter recognition).

The volatile up and down price fluctuations of Minor League cards are very similar to those of the rookie cards released in mainstream major League sets. Fickle collectors and speculators are constantly shifting their focus to the "hot" on-field performers of the moment. In the case of older prospect sets such as this, history has already run it's course and the prices always stabilize -- usually at a very reasonable price if no superstars or Hall of Fame-caliber players are found within.

We'd estimate the current market value of this set in the $10 to $15 range, and think it's a great addition to any baseball fan's collection.