Sports Design Products was a small company that produced a handful of oddball baseball card sets in the mid-1980s, including two sets of legendary Major League players that were illustrated by artist Doug West (click here to see the 1984 and 1985 sets). A third SDP set illustrated by West is the All-Time Great Tigers, which was released in 1986. 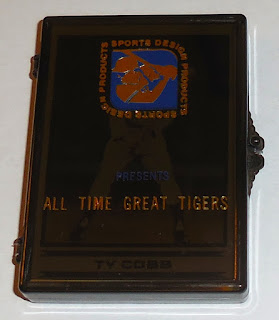 Featuring 22 cards, the set was issued in a dark plastic box with the set name and SDP company logo embossed across the front. The card design is simple and uncluttered, with fronts featuring the player name across the bottom and a large painting of said player occupying the remainder. Backs show career stats for each player and give a few highlights during their time as a Tiger.

The players in the set appear in order somewhat chronologically, with Ty Cobb kicking off the set (he joined the club in 1905) and John Hiller ending it (he last pitched for the Tigers in 1980). Many of the players are in the Hall of Fame, including Cobb, Harry Heilman, Charlie Gehringer and Hank Greenberg. The rest are certainly fan favorites; Harvey Kuenn, Norm Cash and Willie Horton are three names that continue to be collected by faithful Detroit-loving hobbyists.

Doug West, who was 25 years old at the time of the set's release, was beginning to garner national acclaim for his talents as a sports artist. He continues to be very active in the sports art world today, and places an emphasis on players from the different Detroit sports franchises. Anyone interested in browsing West's current and past projects, or who may have an interest in commissioning a personal painting, can find the information on his personal website.

I'm a sucker for small boxed sets from the 1980s, and this set is no exception. With that being said, I will repeat a sentiment I felt while reviewing the two baseball sets mentioned in the first paragraph... I don't believe that the design found on the card fronts do the paintings justice. Card blogger Jason Presley and I joked that the design of those sets resembled one you might see if it were issued by the military during the cold war era (either the United States or the Soviets, you pick). Surprisingly, this Tigers set may qualify even more so; all this set lacks is a hotline number on the card backs which should be called if a neighbor or co-worker is suspected of being a spy.

This set has always flown under the collecting radar, and I can find very few card magazine ads that were selling this set in the late 1980s. I'm sure the production number was released but I'll probably have to thumb through some old publications to find it. SDP typically released sets with a run of 5,000  or less, and I'm guessing that this is no exception. I'd place the current value of a NRMT boxed set at ten dollars.

Random Fact: Hall of Fame catcher Mickey Cochrane played for the Tigers just four seasons (1934-1937), and was also the team manager during much of that time. 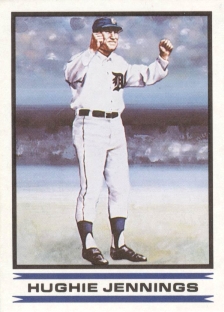