Consider yourself fortunate if you own these. If you've ever seen a set of 1980s baseball cards that were not marketed to 1980s baseball card collectors, this 1985 Chicago Renaissance Society White Sox set would probably be the best example.

In honor of both the 75th anniversary of Comiskey Park and the 70th anniversary of The Renaissance Society, a set of 18 cards was created featuring fifteen White Sox players, manager Tony LaRussa, Comiskey Park and a header card with the "75 Years" logo. Cards measure approx. 5 inches by 4 inches and are printed on semi-glossy cardboard. The cards have blank backs, are unnumbered, and come packaged in a small white cardboard portfolio. 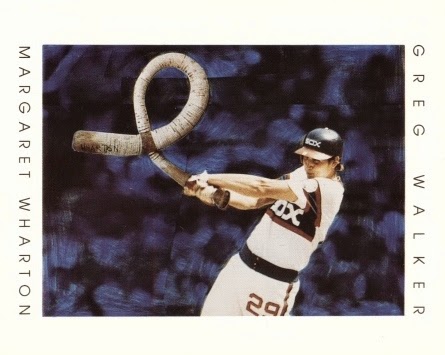 In the words of the Society, "This unique 1985 exhibition brought together seventeen Chicago artists to offer their interpretations of seventeen White Sox players. The format, the baseball card, provides a creative link with our youth that is as refreshing as it is colorful." And boy, are some of these cards colorful indeed. And unique. Each artist was given full rein to paint their picture in the style of their choosing, which makes the set much different than all the others in our collection. First Baseman Greg Walker is painted in a realistic style, with the exception of the strange thing he's swinging at the plate. Ron Kittle looks to be the subject of expressionism, as he's pictured with a large oval head that's branded with the "Special K" cereal logo. Our favorite card is perhaps of Luis Salazar, who is depicted in action with a butterfly net, toilet plunger and straw broom. Eight naked female admirers are holding up the letters of Salazar's name, and based on the generous bulge found in the crotch of his pants, I can certainly guess why.

A limited amount of posters picturing the cards were created, and 100 special sets were signed by both the artists and players. I'm not sure how many "regular" sets were issued, but you simply don't find these anywhere (when I picked up my set off of Ebay five years ago, I had never seen them before). Update: We found an advertisement in the March 1986 issue of Beckett, which stated that 850 unsigned sets were printed... See photo at the bottom. As a general rule, we never picture every card in a set because we want purchasers to have the satisfaction of seeing many of their cards for the first time. In this case we will make an exception, as there is virtually no information regarding these cards to be found on the web. If you'd like to see all of the set, just click this small photo.

It's difficult to establish a value for the set when examples rarely surface on the market. The original asking price for a set back in '85 was $25, and a signed set was $450. Fifty dollars might be a good starting point today, and piecing out the singles may net considerably more -- most Carlton Fisk, Tom Seaver, Ozzie Guillen and Tony LaRussa collectors don't even realize that these cards were printed.

The October 28, 1985 edition of Sports Illustated published a story regarding the original artwork for the cards, which was sold by auction at Comiskey on August 24. It can be found here on the SI website: 1985 Sports Illustrated Article.

The checklist below gives the names of both the players and artists. 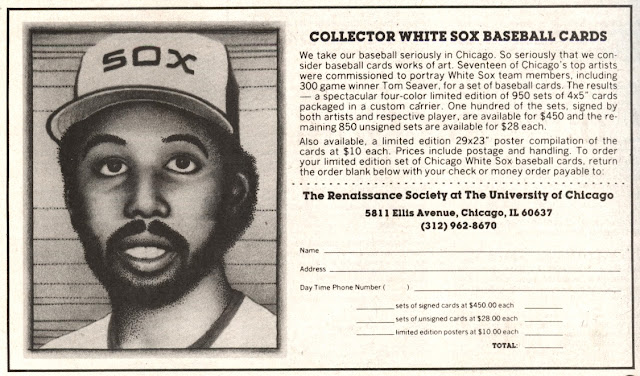 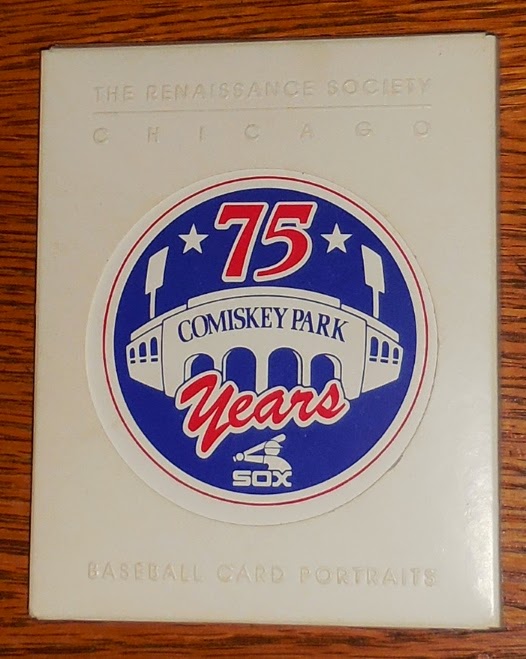 Posted by Anthony Nunez at 6:32 PM