In 1981, the Dallas Cowboys appeared in a police card issue for the third year in a row. As a matter of fact, the 'Boys appeared in two police sets in 1981, issued over 1,200 miles apart from one another!

Police cards were at the peak of their popularity in the early 1980s, and someone came up with the idea of releasing Dallas Cowboys sets in two different regions; one set in the Dallas area, as would be expected, and a second one in Thousand Oaks, California, where the Cowboys held their yearly training camps from 1963 through 1989 (California Lutheran College). The only obvious difference in appearance between the two sets is the sponsor logo found at the lower right of all card fronts; Cards issued in the Dallas area feature the blue and round Kiwanis Club logo, while the cards issued in the Thousand Oaks area feature a design that shows a boy and girl holding hands, with the words "Light Up A Life" appearing above. 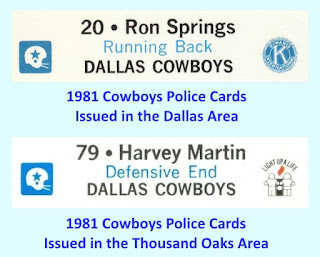 One might make the case that both issues could be combined to make one set, as totally different players are featured within each. The set released in the Dallas area seemingly received the short end of the stick, as most of the team's star players are hosted in the Thousand Oaks issue; Hall of Famers Tony Dorsett, Randy White and Tom Landry, along with starting quarterback Danny White, are all found in the elusive California set. 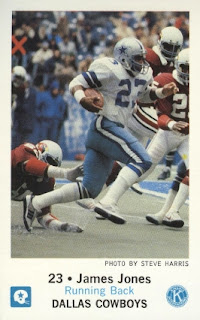 Cowboys fans will still want to grab a copy of the Dallas-area set. Tight end Doug Cosbie and safety Michael Downs make an appearance a year before their Topps rookie cards were issued, and backup quarterback Glenn Carano wasn't featured on a Topps card until the 1984 USFL boxed set was released. Shoring up the set are Cowboys legends Ed "Too Tall" Jones and Butch Johnson, both of whom contributed greatly during the Staubach-era years of the team.

Though the designs found on the card fronts and backs are classic and liked by most oddball collectors, the fact that there were virtually no format changes during the five-set run has been known to cause much confusion... Cowboys Police Sets were released in 1979, 1980, 1981 (x2) and 1983, and they all basically look alike. The year of issue in not noted on the cards.

A complete set of the '81 Dallas set consists of 14 cards. Many of the specimens from this year seem to be "diamond" cut, where the side borders are not cut at a 90 degree angle and don't run parallel to the photo; it's just something to look for when purchasing a set, because this type of defect does hurt the value. While on the subject of value, I'd give the set a current price range of ten to fifteen dollars.

Random Fact: The most obscure Cowboy to make the set is probably center Robert Shaw. Though he was taken by the Cowboys in the first round of the 1979 draft, the Tennessee alumnus never really had the chance to play as he was stuck behind veteran Tom Rafferty. Starting just six games in three seasons, Shaw was out of the NFL after the 1981 campaign.