"Junk wax" was happening in 1988, and that year's Donruss Major League All-Star cards fit the bill quite nicely (as most of you know, the junk wax era of card collecting was roughly between 1987 and 1993, when baseball cards were waaaay overproduced). More on that later.

I have always liked Donruss, even though their unusual 1988 baseball design wasn't one of my personal favorites... Well, that design was simplified a bit and became the basis of the '88 Donruss Major League All-Stars set. Exactly as the name implies, the set features 64 cards and is loaded with the prior year's All-Star players and managers. There's even a card for the Oakland Coliseum, where the game was played on July 14, 1987. Pretty much everyone associated with the 1987 All-Star Game is included, from future Hall of Famers like Cal Ripken Jr., Mike Schmidt and Ozzie Smith to lesser known hometown favorites like Bruce Hurst, Bo Diaz and Ozzie Virgil. 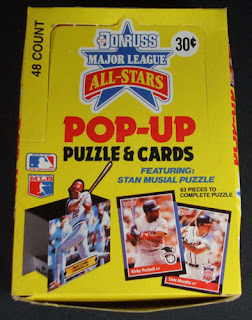 The cards were issued in wax boxes that contained 48 packs. Each pack held five regular set cards, an All-Star "pop up" card, and a three-piece puzzle card. There are twenty different pop-ups in a set, and a total of 21 puzzle cards will make the exact same Stan Musial puzzle that was issued with the regular 1988 Donruss baseball boxes and factory sets.

Unlike Donruss' five prior All-Star sets, which had cards that were a larger postcard size, the decision was made to downsize to the standard card size of  2 1/2" by 3 1/2" in 1988. The pop-up cards, which are flat until unfolded, are also the size of a standard card.

These Donruss All-Star sets were never very popular during their seven-year run, which lasted from 1983 to 1989. Players were rarely featured during their rookie card seasons, and the larger postcard-sized cards from 1983 through 1987 were a turn-off for many collectors.  With more and more oddball sets to choose from every new year, these All-Star cards failed to gain much market share.


To Donruss' credit, these cards were never intended to be an investment. They were intended to be fun, and indeed, fun they are. Collectors and speculators who were on the hunt for the hot rookies of the day (Mark Grace, Chris Sabo and Roberto Alomar) could pick up an '88 Donruss Rookies boxed set to satisfy those cravings. 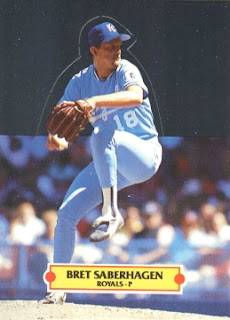 These cards have the distinction of being both an oddball set and a junk wax product. Because the cards were issued in packs, and were grossly overproduced, they certainly qualify for junk wax status. While they may be a little scarcer than the regular 1988 Donruss baseball cards, that's not saying much. Lack of demand and lots of boxes equals cheap fun for the oddball collector.

It may be difficult to find a buyer, but if you do the value of the All-Star set is around $3 to $5. A pop-up set is worth around $2, and the Stan Musial puzzle should probably be thrown into the deal for free. An unopened box can usually be found for $5 to $8, and they are pretty fun to open. The collation of the cards within unopened boxes is fair at best, but you can usually eek out a compete 64 card set from the 240 cards you'll get from the box. The 48 packs found in a wax box give you 48 chances to complete the 20 card pop-ups set, but you may wind up a card or two short thanks to the seven Terry Kennedys you'll inevitably get.

You can read about the inaugural 1983 Donruss Action All-Stars set here. 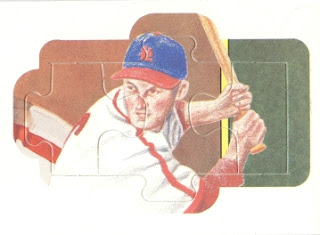