The modern era of football "police cards" began with sets released by the Cowboys, Chiefs and Seahawks during the 1979 season. These early sets were typically given away by local law enforcement officials, who often released one or two new cards a week. Over time it became clear that this type of distribution wasn't a practical way to get cards into the hands of kids, and by the late 1980s few departments were still releasing cards in this manner (most police sets eventually became stadium giveaways).

The Miami Dolphins issued their first police set in 1980, and would go on to produce yearly sets through the 1987 season. Looking very similar to the '79 sets from the three teams mentioned above, the cards feature large, color action photos on the fronts. The player's name, uniform number, position,college, height and weight are found across the bottom, as well as a Kiwanis logo at the bottom right. Card backs were printed in two colors (black and aqua blue), and feature a couple of "Miami Dolphins Tips." The sponsors listed on the card backs are the Local Kiwanis Club, Law Enforcement Agency and the Miami Dolphins. Cards are not numbered except for the player's uniform numbers. 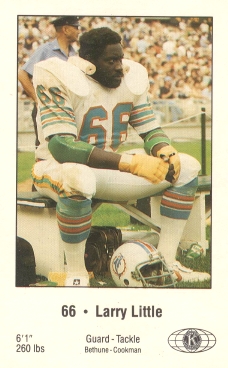 A complete '80 Fins set features sixteen cards, the most valuable of which features Hall of Fame lineman Larry Little. Calling it quits after the fifth game of the 1980 season, Little's card was withdrawn from distribution and is considerably harder to find than the rest of the set. Fellow Hall of Famer Bob Greise also has a card in the set, and this would be his lone police card as he retired before the 1981 season began. Miami's best players were included in the set, meaning most of them were well-represented in the yearly Topps football sets of the era. Running back Tony Nathan is featured a year before his Topps rookie card, and legendary coach Don Shula makes his first showing on a card since appearing on the Colts team card in the 1965 Philadelphia football set.


This set provides an interesting blend of the outgoing old guard (Little, Greise and Foley, each a member of the perfect '72 club), as well as several players who would still be around to see Super Bowls at the ends of the 1982 and 1984 seasons. The action photos found on most of the cards were a trademark of police sets, with action (and helmet logos) being conspicuously absent from the Topps sets of the day.

Of the eight Dolphins police sets released during the 1980s, this inaugural issue is by far the hardest to find today; accordingly, it's also the most valuable. A complete sixteen-card set, with the short-printed Little, is currently valued in the $40 to $60 range. A set without the Little card is closer to the $25 to $40 range.

Click here to search for Dolphins Police Sets on eBay

Random fact: Running back Delvin Williams is the only player pictured in a home aqua blue jersey.