Oddball card sets given out at stadiums (commonly referred to as "SGA sets") usually go unnoticed by most collectors. An exception is when an SGA set contains a hot rookie or prospect, like the 2011 DAV Cedar Rapids Kernels set which features a young Mike Trout. Unfortunately, such an exception is not the case with the 2004 Upper Deck San Diego Padres SGA set.

Don't get me wrong; the '04 Padres were actually a solid team, finishing the season with 87 wins versus 75 losses. Skipper Bruce Bochy worked his usual managerial magic, maximizing the performance of a roster that was filled with solid but unheralded players. Though the club played hard and provided fans with entertaining baseball, at season's end their 87 wins would only place them third in the NL West... four games behind the Giants, and six games behind the Dodgers.

In addition to quality on-field baseball, Padres fans were also treated to further festivities with the opening of the new PETCO Park in 2004. A whopping 39 special promotions were undertaken at PETCO that season - representing almost half of the home games played. T-shirts, ball caps, rally towels, picture frames, and even actual player-worn jerseys (after the final home game of the season) were given to appreciative fans. One of the more popular promotions was held on September 26, when specially-designed sets of Upper Deck Padres cards were given to kids. 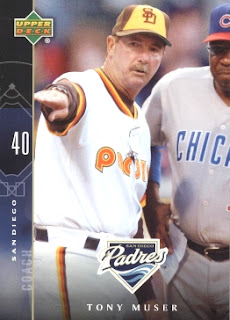 Featuring 33 cards, sets were distributed sealed in clear plastic bags. Both the card design and player photos within this SGA were different than the regular baseball set issued by Upper Deck that season. Twenty-six players are found in the set, along with six coaches and a team mascot card. Fronts showcase large color photos with a vertical blue border along the left side. The Upper Deck Company logo is found at the top left, while the Padres logo and subject's name are located across the bottom. Backs have a career stats line for active players, and short bios are found on all cards. All cards are numbered.

Padre favorites of the day include pitcher Jake Peavy, who led the league with a 2.27 ERA that season, first baseman Phil Nevin, who led the club with 26 home runs and 105 RBI, and future Hall of Fame reliever Trevor Hoffman, who notched 41 of his 601 career saves in 2004.

Several veterans near the ends of their careers played for the Friars that year. Pitchers Rod Beck and Sterling Hitchcock retired after season's end. Pitcher David Wells was completing his 17th MLB season, while first baseman Dave Hansen was finishing his thirteenth and outfielder Ryan Klesko his twelfth. Young up-and-comers included pitcher Akinori Otsuka and shortsop Khalil Greene, both of whom could never duplicate the success of their 2004 rookie seasons. Greene finished second in the N.L. Rookie of the Year voting that season, while Otsuka finished third (Pirates outfielder Jason Bay, who the Padres traded away the year before to get veteran outfielder Brian Giles, won the award).

SGA sets of this nature tend to disappear over time, as many are thrown away or tossed into the proverbial junk drawer. I wouldn't call this a scarce set, but I will say that they can't be found in any large quantities these days. I'd estimate the value of an unopened set to be in the $5 to $8 range, mostly because of the lack of superstar players and demand in general. Consider this set a must-have for hardcore Padres collectors.

Random Fact: The "Swinging Friar" has been the team mascot since the late 1950s, while the Padres were still a minor league club. The San Diego Chicken makes occasional appearances at local events, but has never been the official mascot of a team.

Click here to hunt for Padres Stadium Sets on eBay

Posted by Anthony Nunez at 6:06 PM