We love us some uncut sheets here at the Oddball Card Collector blog. These sheets allow us to see the details of a set that may have been previously unknown, such as which cards were double-printed. Sometimes sheets will feature scarce cards that were distributed in limited quantities (often because the player left the team). And maybe, if the planets happen to align, a sheet may contain a card that was withdrawn from the set altogether; undocumented cards of this nature are a "holy grail" for a small segment of hardcore collectors.

The uncut sheet we have chosen to highlight today contains the 1987 Buffalo Bills Police set. The sheet has nine rows of eight cards each, as shown below:

You can quickly see, based on the photo above, that each row contains an eight-card complete set. And what a great set this is. Defensive end Bruce Smith, head coach Marv Levy and quarterback Jim Kelly are enshrined in the Pro Football Hall of Fame, and we have a feeling that wide receiver Andre Reed will be joining them shortly (Edit: he did). While not a superstar, tight end Pete Metzelaars played 16 seasons in the NFL, ten of them with the Bills, and retired with the most games played by a tight end in NFL history (235). Punter John Kidd lasted 15 years in the league, linebacker Eugene Marve eleven, and defensive tackle Joe Devlin thirteen (all with the Bills).

Here's a look at the full sheet... And yes, those are cassette tapes holding down the corners: 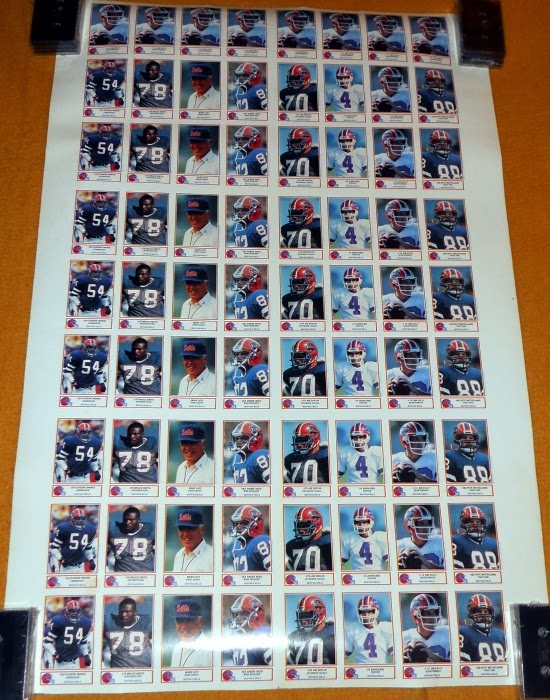 Yep, that is indeed a solid row of nothing but glorious Jim Kelly cards. So, on a sheet that has nine rows, eight rows each feature a complete eight-card set, while one row features eight additional Jim Kelly cards. This is a classic example of a star card being "double printed." A way to visualize this would be to take the row of eight Kelly cards from the top of the sheet, and drop it to the right of Pete Metzelaars. Each of the eight rows would now have two Kellys per set -- hence, the double print.

The Kelly card has always seemed to be more plentiful than the others in this set, and this sheet confirms why. (One can find numerous Kelly singles on Ebay now, even as I type this.) Another classic example of a double-printed card from a police set is the Hank Aaron found in the 1981 Atlanta Braves set.

The focus of this post has been split between the set and the sheet itself, so we won't go into all the fine details regarding these cards. We will say, however, that this was the first of several Bills Police sets and is a must-have for football collectors. Sets should sell in the $7 to $10 range.

Posted by Anthony Nunez at 11:37 PM No comments:

If you've collected baseball cards for any amount of time, chances are you've run across one or more small baseball "discs" featuring colorful borders and black and white photos of star players. This style of disc was issued countless times by a company called Michael Schechter Associates (MSA) between the years of 1975 and 1985, and while the design itself was largely unchanged during this time, the variety of sponsors found on the backs of these discs are what keep hardcore collectors searching on their never-ending hunts. MSA produced sets for baseball, football and even basketball during this eleven-year period. Some MSA disc issues are about as common as dirt (1976 Isaly's Baseball Discs), while others are notably scarce (1976 Coca-Cola Chicago Bears Discs).

Featured here is a 32-disc effort released by MSA and a company called "On Deck Cookies" in 1982. Sold primarily on the East Coast, one card was randomly packaged with a large cookie and typically sold in the 25 to 29 cent range. Nearly a dozen Hall of Famers can be found within the set, as well as Pete Rose and many other fan favorites of the early 1980s. The discs are not numbered, and the backs do not feature any information regarding the player pictured on the front. 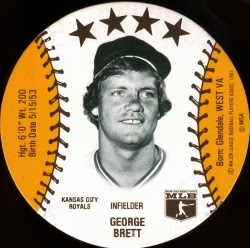 The set was endorsed by the MLB Players Association, but not Major League Baseball; accordingly, no team logos are found on the player ball caps. This worked well for MSA, as many players were photographed wearing the uniforms of their former teams. Many of the photos were used on multiple MSA issues and were several years old by the time they were recycled for use in the 1982 On Deck set. "Vintage" player pictures include George Brett, Johnny Bench and Reggie Jackson, who is pictured wearing his Baltimore Orioles uniform from 1976!

Regarding the scarcity of the various MSA baseball disc sets produced during this time, the 1982 On Deck set is one of the tougher ones to find. An Ebay seller auctioned off several uncirculated sets a few years ago (we grabbed three of them), but the hobby apparently absorbed them without decreasing the long-term value. While complete sets do appear on Ebay from time to time, it is much more common to find random singles. We'd estimate the current value of the set at $35 to $50. 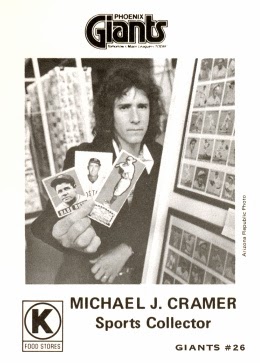 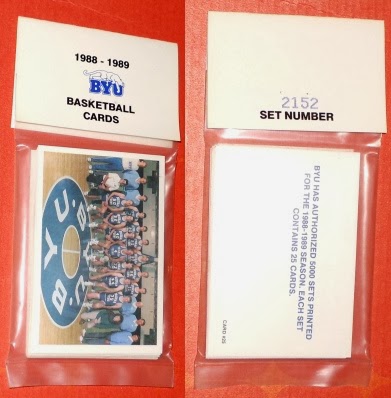 You may not have an interest in collecting examples of every sports schedule ever printed (a true fool's errand, indeed), but you can certainly have success -- and show steady, measurable progress -- while collecting the schedules of your favorite team or league. Pulled from the depths of our shoebox, we hereby randomly present a consecutive run of Los Angeles Rams pocket schedules, printed for the 1980 through 1985 seasons. 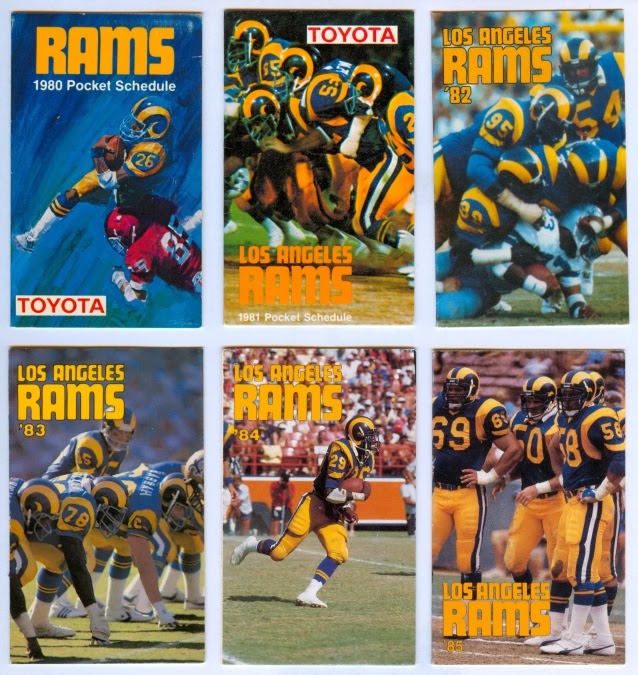 Beautiful, colorful, borderless photos are the trademark of these issues. The 1980 schedule features a painting of 1,000 yard rusher Wendell Tyler, inexplicably trying to avoid being tackled by a member of the USFL's New Jersey Generals (a team that would not exist for another three years).

Actual game photos were used on the fronts from 1981 onward. The '81 release shows linebacker Jim Andrews (52), with a host of other Rams defenders, coming out of their stances for an all-out blitz.

Hall of Fame Cowboys running back Tony Dorsett is tackled for a loss on the '82 sked, with defensive tackle Phil Murphy (95) and linebacker Howard Carson (54) getting their time in the spotlight.

Starting quarterback Vince Ferragamo (15) is pictured on the '83, with Dennis Harrah (60), Hall of Famer Jackie Slater (78) and Preston Dennard (88, far left) lining up for a play against the Saints.

All-world running back Eric Dickerson earns his place as the lone player on the 1984 schedule.

Finally, the '85 release pictures three Rams defenders preparing for the next down. Nose tackle Greg Meisner (69), linebacker Jim Collins (50) and linebacker Mel Owens (58) get the nod this year.

And now for the backs: 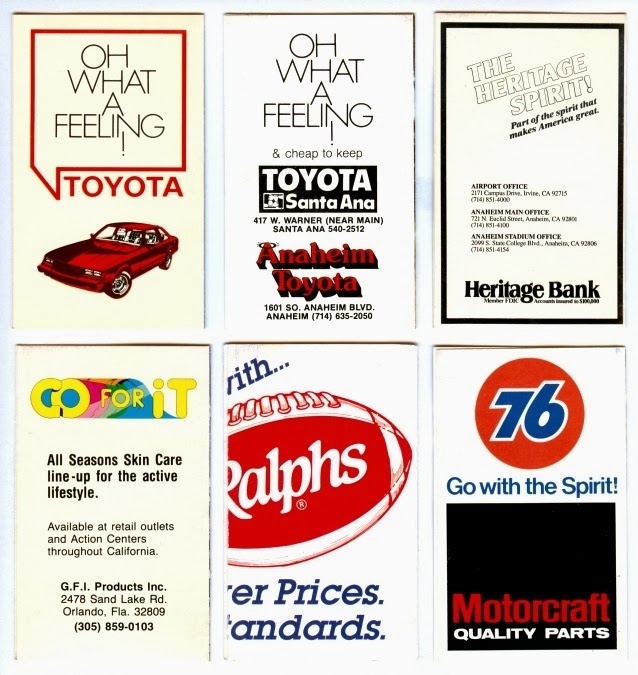 Three of the schedules (1980, 1984, 1985) feature sponsors whose advertising does not mention a specific location, while the other three do. The 1981 schedule mentions Toyota dealerships in Santa Ana and Anaheim, and the 1982 version lists three branches of Heritage Bank. The 1983 schedule is a bit puzzling, as the sponsor on the back is located in Orlando, Florida! (but their skin care products were sold in Southern California).

Schedules such as these often have a variety of different sponsors printed on the backs, with many variations escaping detection by the hardcore collectors who are attempting to checklist them. The seemingly endless variations, and the inability to catalogue them, are why many team collectors aren't concerned with collecting schedules. 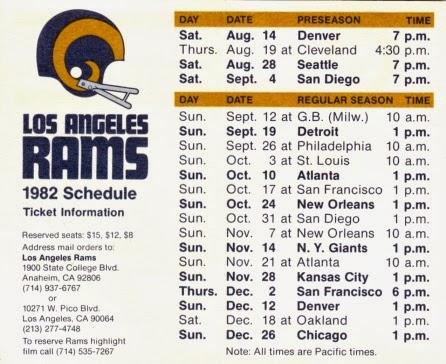 All of the schedules pictured above were folded in half (bi-fold) except for the 1984, which was longer and folded into thirds (tri-fold). The third panel on that 1984 sked is a Ralph's coupon that could be used to save 25 cents on Chunk Cheese at the deli! The photo above pictures the inside of the 1982 schedule, which wound up being a strike-shortened season.

Posted by Anthony Nunez at 1:51 AM No comments: