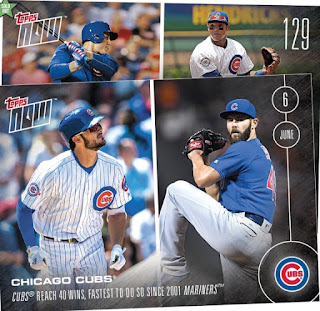 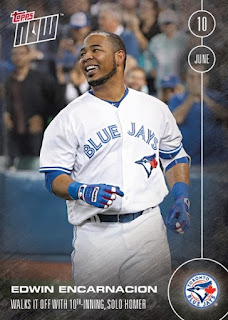 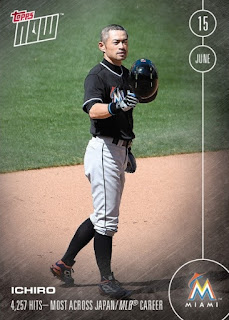 Posted by Anthony Nunez at 2:48 PM No comments:

Stadium giveaway sets were quietly alive and well in 1997, as is evidenced by this 30-card White Sox issue. Subjects feature active players, coaches, trainers and Sox legend Nellie Fox, who was elected to the Baseball Hall of Fame that year.

Cards measure the standard 3-1/2 by 2-1/2 inches and are printed on medium-weight white cardboard stock. All cards except for Fox feature color photos on the fronts, and other than white outside borders, have just the player names printed in silver ink across the left side. Backs are printed in black and show MLB statistics, along with a "SOX" logo at the lower left and a Nellie Fox tribute logo at the lower right. Uniform numbers are also listed on the backs, and the cards are not otherwise numbered.

The '97 White Sox fielded a respectable team under skipper Terry Bevington, managing to basically break even with 80 wins versus 81 losses. Pitching seemed to be a problem, with Chicago's top three workhorse pitchers (Navarro, Baldwin and Drabek) each having an ERA above 5.00. Baldwin and Drabek tied for the team lead in wins, with just 12 each. Reliever Roberto Hernandez notched a respectable 27 saves and five wins, with an ERA of 2.44.

Hall of Fame first baseman Frank Thomas is the star of the set, and smacked 35 homers and 125 RBIs that season. Newly-acquired slugger Albert Belle hit 30 home runs with 116 RBIs (and 105 strikeouts), and fan-favorite Harold Baines hit a respectable .305 in 93 games before shipping off to Baltimore. Other notable names include shortstop and future manager Ozzie Guillen, third baseman Robin Ventura and veteran catcher Tony Pena, who was finishing an 18-year career in the Majors. The closest thing to a "prospect" card in the set features 33 year-old pitcher Carlos Castillo, who went on to log just 210.2 innings in four MLB seasons. 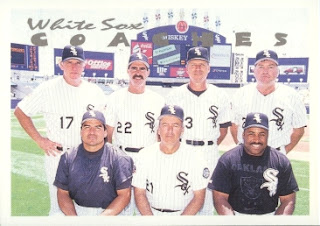 This type of SGA set often includes subjects not found in regularly issued card sets. In this case, manager Terry Bevington gets his own card and both trainers share one. All seven coaches also share a card, and their names are only revealed through the answering of several trivia questions found on the back.

Once again, we can chalk up this set within the category of obscure SGAs, with no presence whatsoever on the collecting radar. I'm not sure how many sets were printed, but they don't show up on eBay in large numbers. I'd estimate the value of a set to be in the $5 to $8 range due to the lack of demand and no prospects who went on to have notable careers. Anyone looking to add a set to their collection should be able to find one at a decent price with a little patience.

Posted by Anthony Nunez at 5:09 PM No comments:

The 1999 Connecticut Huskies Men's Soccer set is a perfect example of why soccer cards will never be fully documented. Who the heck even knew these existed?

Consisting of fifteen player cards, these measure the standard 2-1/2 by 3-1/2 inches and are printed on white card stock with semi-gloss fronts. Large, color photos grace the fronts and are borderless except for the top, where a light grey box contains the "UConn" designation, player's uniform number, and "1999 Connecticut Men's Soccer." The player's names are found along the front bottoms, along with a small Huskies logo and First Union bank sponsor logo. Card backs feature college stats and summaries of high school and college performances. Cards are not numbered except for the player uniform numbers on the front. 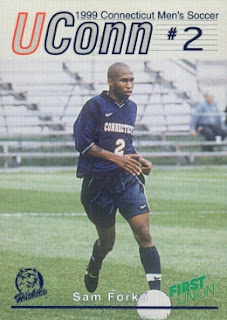 Much of the fun of collecting the kinds of sets involves learning about the players, and quick internet searches reveal all kinds of information. Matt Chavlovich, the starting goalkeeper for UConn in 1999, went on to play one year in the USL with the Connecticut Wolves and is currently the Vice President of Licensing for MLS. Chris Gbandi played professionally for FC Dallas, Haugesund and Miami FC from 2002-2010, and is currently head coach of the Northeastern Huskies men's team. Back Max Zieky played one year for the Connecticut Wolves and has been been with Dell Computer since 2002, where he is currently in charge of Business Intelligence and Sales Analytics. Back Sam Forko, originally from Liberia, was on the roster for nine games with the MetroStars in 2002.

A collector could probably spend the remainder of their life stumbling upon this kind of obscure issue. I love soccer oddball sets, though I couldn't care less about the sport itself (soccer oddballs are just... cool). It's difficult to place a value on a set that doesn't sell very often, but I'd certainly jump on this if I could get it for ten dollars or less. To the right fan or collector, the set might sell for considerably more.

Posted by Anthony Nunez at 10:21 AM No comments: