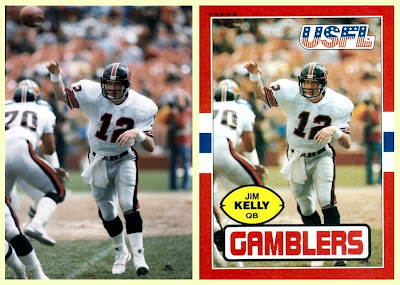 Countless steps were undertaken by Topps designers during the course of creating sports (and non-sports) cards in the 1980s. Many of these processes remained similar to the steps used back in the 1940s, when Topps was new to the card business, and some printing principles are still in effect to this very day.

One of the production steps performed religiously by Topps during the 1980s was the creation of "match print" photos... These were full-color photographs, usually printed on commercial photo paper or similar stock, that allowed designers to not only eyeball the content itself, but also play with border cropping ideas and color corrections. These match photos often reveal a view larger than the one used on a card, and these one-of-a-kind gems are a welcome collectable for team and player collectors.

The photo shown above was used on Jim Kelly's 1985 Topps USFL card, which is pictured on the right. In this case, the photo was ultimately cropped on all four sides, and Kelly's lower legs were obscured by the Gamblers team name. During an era when bench shots were featured on the majority of Topps football cards, this superb action shot remains a collector favorite within the 132-card 1985 USFL boxed set. 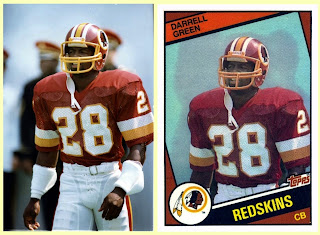 Another interesting match print photo that surfaced recently features the image used on Darrell Green's 1984 Topps rookie card. Unlike the Kelly example, this match photo would undertake considerable airbrushing, and the removing of the lower 20% of the pic, before finding its' way onto Green's card. For years card geeks have wondered what exactly (or who exactly) was removed from the background of this card, and seemingly transformed into a questionable cloud that suggested Green was in need of a shower. Only now do we know that a couple of Soviet KGB agents, in full dress uniform, were there on the RFK sidelines to doubtlessly steal copies of team playbooks.

Keep match print photos in your thoughts; they are unique, in-house production items that will be sure to compliment any collection.