Are eTopps Prices on the Rebound?

For a brief explanation of the eTopps card program, click here.

With the increasing popularity of limited-issue insert cards that have dominated the collecting hobby since the late 1990s, one could make the case that eTopps cards never had a chance. After all, are cards with a print run of 5,000, 2,000, or even 499 really that limited? Can the hobby really absorb over five thousand 2002 Curt Schilling eTopps cards?

Let's dwell on that '02 eTopps Schilling card for a moment... A whopping 5,190 of these were printed and sold, and based on the online eTopps price guide, the card carries a current value of 28 cents. The value of all eTopps cards are determined by taking the average price of the last ten eBay auctions, minus the highest-priced auction and the lowest-priced auction (so really the value is based on eight auctions, not ten). Here's a screenshot showing the details of the last ten '02 Schilling auctions, taken right from the eTopps website: 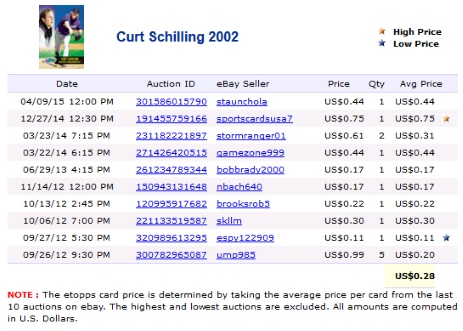 The first thing I'd like to point out is the ten auction dates listed on the left side of the box.  With all of those Curt Schilling cards floating around, surely you can find a hundred or so of these on eBay at any given time... Right?

Well, not according to the dates shown. As a matter of fact, this card has only been sold once on eBay this year! In 2014, the card was sold a mere three times, and only once in 2013! I believe one reason for this is because the low value makes it pointless to sell the card... After all, eBay fees will cost around a quarter for the auction. Another reason is because the vast majority of these cards have been collecting dust in the eTopps warehouse for thirteen years now, still owned by the collectors who paid $6.50 each when they were initially offered. I would bet that many of these card owners haven't even checked the values of their portfolios for several years now -- and who can blame them, since their cards are worth just a small fraction of what they originally paid for them.

I do have a theory that eTopps prices have been making a modest (but growing) rebound this past year or so. The Schilling card provides a fine example, as you will notice the card selling in the 11 to 22 cent range in 2012-2013. Then, in 2014, prices began to firm up considerably with sales of 44, 31 and 75 cents. The lone 2015 auction ended at 44 cents. But what does this really mean?

While the sample size is admittedly small, it is obvious that collectors are now willing to pay more for the card when it comes available today than they were two or three years ago -- and the same can be said about countless other eTopps cards, too. Take a look Frank Gore's 2007 issue as another example. FYI, 749 of these were printed: 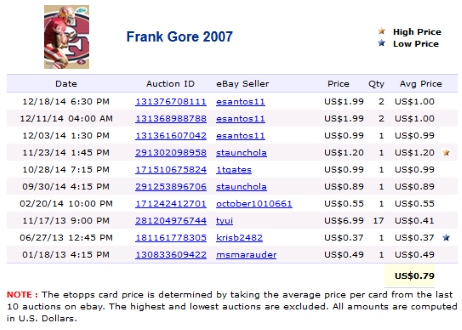 I haven't even mentioned how nice these cards are. Seeing photos of eTopps cards online may give one a glimpse of the design, but these cards must be seen in person to fully appreciate the colorful foil and deep glossy surfaces.  Many modern-era card collectors rank eTopps right at the top for quality, thanks to the company's premium visual and construction elements. 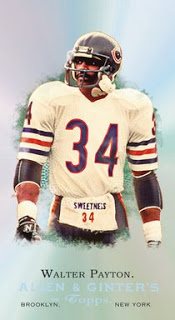 Does anyone else believe that eTopps prices are on the rebound, specifically on the cards valued at a dollar or less? I believe that current and future collectors of the Topps brand will have an interest in these cards, and the "fire sale" will soon be coming to an end. It would be foolish to expect the 2002 Curt Schilling card to head back up to $6.50... But for 28 cents?

What is the eTopps Program?

If you're a collector of oddball sports cards, the eTopps program may be of interest to you. For those not familiar with the program, let me offer a brief explanation. 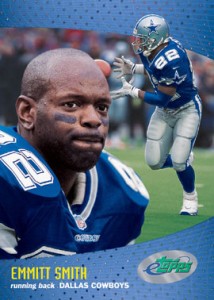 Back in 2000, Topps decided to try something new... the blending of high-end sportscards and online trading. This was accomplished by creating their eTopps website (www.etopps.com), which is the place where several things happen. First, this is where collectors go to register their personal accounts. Once registered, each collector is given free access to their online "portfolio," which is where they can view the cards they own, each card's current value, and even the price history of any eTopps card. The eTopps website also has a trading post where collectors can wheel and deal with others, trading eTopps cards in and out of their online portfolios.

Before I get ahead of myself, I should mention the nature of these cards. Topps produced beautiful, physical cards from 2000 to 2011 for the eTopps program. These new cards entered the market through the eTopps website, where they were made available for sale for limited amounts of time. Interested collectors placed their orders for the cards right through the website, and a short time later the newly purchased cards would show up in their portfolios. Basically, physical cards were purchased but not shipped -- unless a collector wanted them shipped. What this meant (and still means today) is that these cards can easily be traded back and forth with anyone registered on the eTopps website. And thanks to an arrangement with eBay that has been in place since day one, card owners can still sell any and all cards in their portfolio right on the popular auction site with the click of a button. Upon an auction's end, payment is made to the seller and the card is simply transferred to the new owner's portfolio.

If a collector wants to take physical possession of a card (known as "in hand"), they can contact eTopps, pay a shipping fee, and have the cards delivered right to their door. Keep in mind that once a card is in circulation, it is no longer eligible for direct online trading or price tracking on the eTopps website. Of course, the benefit of taking physical delivery of these cards is the ability to enjoy them in person, and anyone interested in obtaining some of these "in hand" gems can find them scattered here and there at card shows, card shops and internet auction sites. 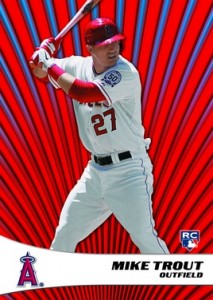 As noted above, Topps unfortunately printed their last eTopps cards in late 2011 when they released the 37 cards comprising their final yearly football set. Interest in the cards had sunk to a new low after twelve years of steady releases, and as a result many of the later cards were released with production runs lower than 500 -- very modest numbers for non-insert cards.

So what's the status of the eTopps program these days?

Though the last sports card ran off the press a few years ago, the website is still chugging along with several active features still intact -- namely the trade post, checklists (price guides) and individual portfolios. Unfortunately, the eTopps message board and a popular "games" section were closed down some time ago. A small but dedicated group of eTopps enthusiasts can be found trading on the site today, swapping cards worth anywhere from a quarter on up (it's really quite addicting).

I have bought, sold and traded eTopps cards since 2006, and I'm definitely a huge fan. Anyone looking to acquire nice cards at a great price should consider heading over to www.eTopps.com and getting started! It's free to register, and then purchasing a few eTopps cards off of eBay would be the next step. All it takes is one card in your portfolio to join the ranks of potential traders!

My next blog post will examine the cards further, and I'll make the case that these classy gems are making a comeback.

After a couple years of writing this blog, it finally occurred to me that an L.A. Dodgers set has not been the subject of a post... An oversight that will change today.

What better way to kick off some Dodger love than to feature their first police set, which was issued back in 1980 -- an era of blue Lasorda baseball that ranks among L.A.'s best and most exciting. The club would win 92 games that season behind the efforts of a talented blend of veterans and youngsters. Seasoned pros Steve Garvey, Don Sutton, Ron Cey, Charlie Hough, Bill Russell, Jerry Reuss and Dusty Baker shared the field with up-and-comers Pedro Guerrero, Mike Scioscia and Bob Welch. Unfortunately, Steve Howe (the 1980 NL Rookie of the Year) was not included in the set; nor was fellow pitcher Fernando Valenzuela, who managed to sneak into ten games during the 1980 campaign.

As for the '80 police set, it is complete at 30 cards (29 players and a team photo). Printed on soft, white card stock, the fronts have a semi-gloss coating that give the large action photos a nifty look. Basic player info is printed along the bottoms of the fronts. Backs are printed in blue and feature a large LAPD badge in the background, but the cards are not numbered except for uniform numbers. Each card back also features a baseball term and a helpful tip for California's youth ("Boost your grades at school and hit .300 with your chores at home." In other words, kids were only expected to do 30% of their schoolwork and chores correctly...) The cards are larger than the typical Topps size, measuring 2 13/16" by 4 1/8".

Speaking of Topps, their nationally-distributed baseball cards were still the only game in town back in 1980. Hungry collectors were eager to snap up anything they could find in those simpler times, especially with stacked clubs like the Dodgers. Like all true police sets these cards were a regionally-distributed issue, so hobby publications and sports magazines of the day featured advertisements that offered to sell a set to anyone willing to part with a ten dollar bill.

The Dodgers would be featured on yearly police issues through the end of the century, with the one exception being the 1985 season (and we're not sure why). Regarding scarcity, none of the Dodgers police issues from the 1980s or early 1990s are difficult to find; sets from the mid to late 1990s are a bit harder to track down, but they're out there too.

These days, a complete set in NRMT or better condition is valued at the same ten dollar bill that folks paid 35 years ago... Not the best investment a collector will ever make, but definitely one of the coolest sets a collector can own!

Uninteresting Fact: Light-hitting infielder Teddy Martinez was demoted to AAA ball before the 1980 season began, never again to make it back to the Majors. His inclusion in the set, and the omission of Steve Howe, leads us to believe that these cards were created very early in the season.

Posted by Anthony Nunez at 1:53 PM No comments: