Mother's Cookies produced arguably the nicest baseball card team sets of the 1980s, and found a niche by distributing the cards only in the regions from which the teams were based. The company's first set of the decade featured the San Francisco Giants in 1983, then expanded to feature sets for the A's, Astros, Giants, Mariners and Padres in 1984. 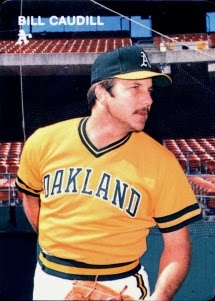 Mother's tried cross-promotions with Major League Baseball before issuing the cards. Of note are their "ticket promotions" which were conducted at MLB local-market retailers. Displays were set up in the stores to promote 1/2 priced reserved seat tickets for specific games. A while back we added a few promo sheets to our collection. These sheets were distributed to retailers to give details on the campaign, as well as a look at how the in-store displays would appear. Here's the 1982 Astros sheet, which explains the 1/2 ticket promotion for the Astros vs. Pirates game on July 18, 1982 (Bob Knepper pitched a complete game for a 4-2 hometown victory): 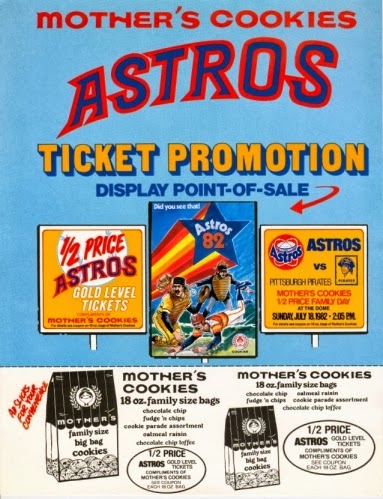 Here's the Dodgers version of the sheet, which detailed the 1/2 priced reserved seat tickets for the Dodgers vs. Phillies, played on July 25, 1982. Fans watched Phillies ace Steve Carlton pitch a complete game shutout against Dodgers hurler Jerry Reuss, who surrendered just a single run on a Manny Trillo RBI: 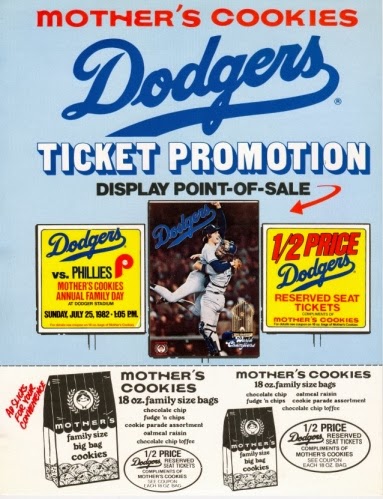 Seattle Mariners' fans were the beneficiaries of 1/2 priced reserved loge tickets for the contest versus the Royals on June 20, 1982. The aging Gaylord Perry could not hold off a bat-happy Royals club, with Willie Wilson, George Brett, U.L. Washington and Hal McRae each clubbing multiple hits (Quisenberry earned the save by pitching 2 2/3 innings): 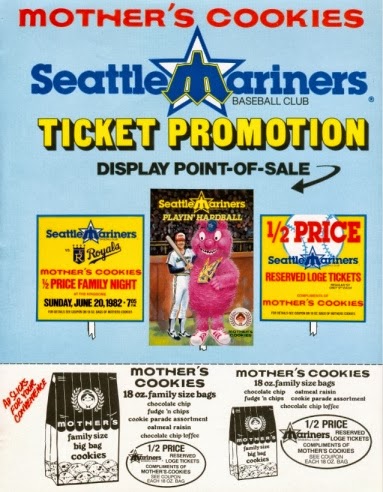 Both the A's and Giants were featured on one promo sheet. Note that this promotion also included team poster giveaways, as well as multiple game dates. For the Giants, the game featured on the sheet was versus the Pirates on Aug. 28, 1982. Attendees were treated to a 4-2 Atlee Hammaker win and Greg Minton's 23rd save of the year (he would save 30 games by the end of the season). The game highlighted on this sheet for A's fan was the Aug. 22, 1982 contest that saw A's workhorse Rick Langford take a loss versus unknown hurler Brian Denman: 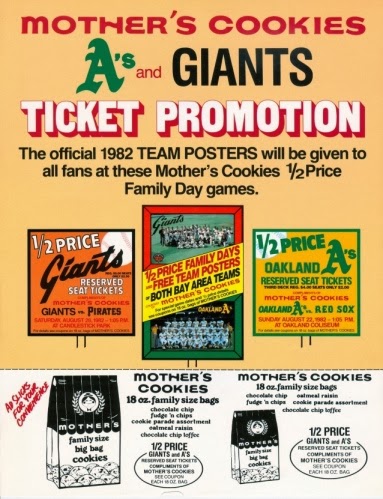 We also own two sheets for the 1983 season. Of special interest is the A's/Giants sheet, because it mentions the Giants baseball cards that were given out on August 7, 1983 (A's fans were once again given a team poster). The Giants hosted the Astros that day, with none other than Nolan Ryan pitching the complete-game 2-1 win over the Giants, snagging eight strikeouts along the way. The A's game was played on Aug. 14, 1983 against the Twins, with Davey Lopes, Mike Davis and Dwayne Murphy each smacking two RBIs for a 6-0 hometown win: 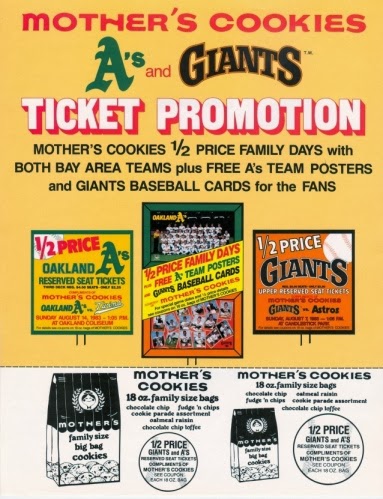 The last sheet in our collection is for the Dodgers' 1/2 price ticket promotion for the July 17, 1983 game versus the Cubs. The event was an unfortunate one for Dodgers fans, as Cubs hurler Dickie Noles pitched a complete-game shutout and enjoyed a 7-0 win: 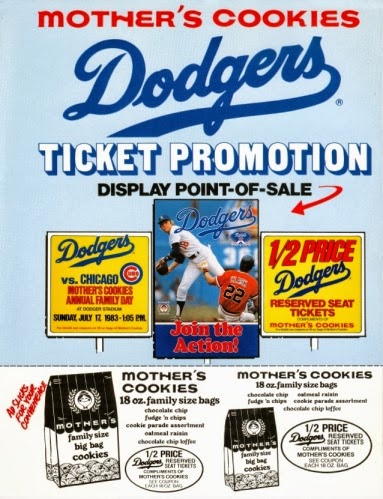 These sheets may be of interest only to the die-hard Mother's collector, or perhaps the advanced team collector. With that being said, someone has to waste their day off updating their overdue blog, right?

Posted by Anthony Nunez at 2:22 PM No comments: