Redskins police sets from the 1980s and early 1990s are about as common as dirt. I'm not kidding. Bring a shovel into your backyard, give it a good scoop, and look to see what you've unearthed. There will be a 1985 Redskins police set, and possibly one from 1988 if your shovel went deep enough.

The purpose of this anecdote is to illustrate what the 2001 Redskins Upper Deck SGA set isn't; you ain't gonna find one of these sets in your backyard. 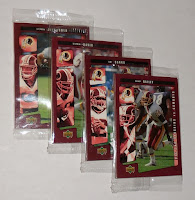 The set was released in five-card cello packs during the December 2 home game versus the Dallas Cowboys. (Four cards featured Redskins players, and one featured an Upper Deck "Bucks" discount code.) A complete set consists of ten player cards that are numbered on the backs. Two of the players, quarterback Sage Rosenfels and wide receiver Rod Gardner, are showcased during their rookie seasons. Rosenfels never threw a regular season pass during his one and only year with the Skins, but did manage to stick around the league with a variety of teams as a backup through the end of the 2011 season. Gardner was Washington's first round pick of the 2001 NFL Draft (15th overall), and managed to eek out a 1000-yard receiving season in 2002. Rod's stint with the Redskins lasted four years, with his final two NFL seasons being divided among the Panthers, Packers and Chiefs. The remaining eight cards here feature veterans who enjoyed varying degrees of fame and fortune. Hall of Famers Darrell Green and Bruce Smith lead the Pack... errrr, Skins... with twelve-time Pro Bowler and future Hall of Famer Champ Bailey guarding the rear.

As previously mentioned, the cards were distributed on December 2 during a crucial home game against the Cowboys. Washington lost their first five games of the season, then went on to knock off the Panthers, Giants, Seahawks, Broncos and Eagles to even things up. The contest versus the Cowboys wound up being a close, if not frustrating game that would result in a 14 to 20 Dallas victory. By season's end, Washington would own an 8 and 8 record and narrowly miss the playoffs. 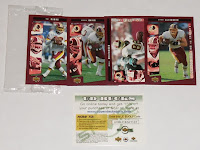 We purchased ten of these cello packs off of eBay, for a total of 40 player cards. Lo and behold, our collation was perfect and yielded four complete sets. I have never claimed to be an expert on 2000's stadium giveaway cards, especially with the random nature of these sets and the lack of references that document such things. I don't know how many of these cards were released in 2001, but do know that they haven't shown up all that often in the years that have followed. If I were forced to guesstimate the value, I'd put a set in the ten dollar range. Upper Deck produced a well-centered, problem-free group of cards here (even the colored borders are chip-free on our cards), so make sure the ones you buy look as nice as ours.

Posted by Anthony Nunez at 8:45 PM No comments:

Thus sums up the Nassau County Police Department's P.R.I.D.E. program of the 1980s.

Before I receive tons of hate mail for the above comments, I need to confess that I'm just being silly, and I was a police officer (and a kid) in the past... The NCPD is an excellent organization, the hockey cards they distributed these many years ago are also excellent, and the idea of having kids earn the cards was a good one.

The New York Islanders were the subject of at least a couple of these "P.R.I.D.E." sets produced during the '80s. Based on the players pictured, the cards featured here were printed in 1987 or 1988. The twelve cards are standard sized and showcase borderless action shots on the fronts, with player names appearing in small font across the bottoms. Card backs are less attractive but informative, specifying one of twelve learning sessions and giving useful childhood tips (Just keep saying "NO" and give them the cold shoulder). Drug abuse was the main focus of the twelve sessions, with minors in self-esteem, healthy eating and exercise. According to the backs, the cards were printed by Penny Lane Graphics Inc. of Hempstead, Long Island.

Hockey fans are well aware of the legendary Islander lineups of the 1980s, with LaFontaine, Sutter and Trottier headlining an impressive group of skaters in the set. Twelve bona fide Islanders are found here, with defenseman Steve Konroyd being the short-timer of the group... Konroyd played in 169 contests for the Islanders during parts of four seasons.


From what I can tell, these P.R.I.D.E. cards are hopelessly rare. Little to no information can be found about them on the interwebs, and the set we own came from a guy who actually attended the twelve sessions as a lad back in the 1980s. It would be silly to quote a value for the set, and my quota for silliness was already filled at the beginning of this post.