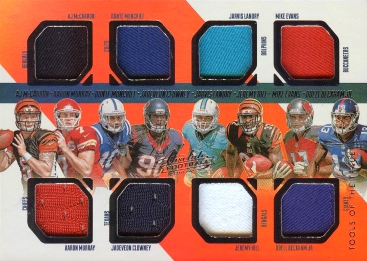 I've decided to start collecting Odell Beckham Jr. Cards. We share our hometown of New Orleans, and I've been an LSU fan since I can remember. Some of my earliest football memories include Hall of Fame wide receiver Lynn Swann, and in my opinion both players display exceptional grace and style when a football is lobbed in their direction. Beckham probably has more raw talent than Swann did, if I dare say so, and will probably wind up with numbers much bigger than Swann because of the many changes occurring to the modern-day passing game these past 35 years. 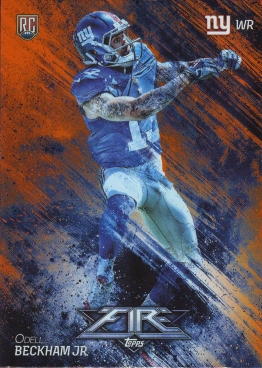 There's a certain excitement associated with collecting current players. Though I've never collected cards for investment purposes, there's an undeniable rush when a player does well on the field and you have several of his cards tucked away in your collection. I'm looking forward to having this feeling for many years to come with the Beckham collection.

Now a few words regarding dollars and sense. Odell's rookie cards were released during the 2014 NFL season, and as of this writing, pretty much all of the 2015 cards have been released. The first thing I noticed when monitoring his rookie cards was the fact that they are very reasonably priced on eBay; his base rookies from sets like Bowman, Topps, Strata and Score can be had for a couple of bucks apiece. Even serial numbered jersey cards start at ten dollars or so. Beckham's autographed rookies start near the $50 range, once again usually selling considerably below "book" value. It's amazing to compare these prices to the 1986 Donruss Jose Canseco rookie card, which was selling for $60 or more back in 1990. My oh my, how this hobby has changed since then.

Beckham's 2015 cards are even cheaper, with his base cards virtually being given away. Inserts from 2015 aren't far behind, with the Panini Clear Vision jersey card pictured below being snagged for less than the price of a cup of Starbuck's coffee. I will admit that I'm concentrating on his 2014 rookie cards, but seem to be obtaining a steady stream of the '15s as they are often included in the large player lots I like to buy.

Collect what you like; that's always the golden rule. I'm liking me some Odell B. these days, and I may even have a slight case of the rookie hoarding syndrome -- but hey, work with me here.  When I can buy 25 to 30 Beckham rookies for the same price that one '86 Donruss Canseco cost back in 1990, why wouldn't I? 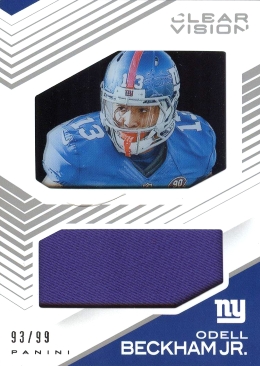 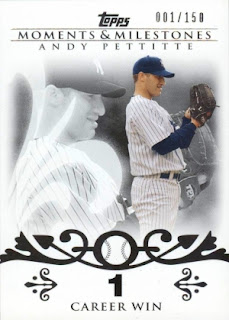 Of course I collect oddball cards. I love 'em.

Oddball cards have been the focus of my collection for many years now, and will continue to be so. Researching and locating these food, police and SGA issues are a fun challenge... And there are always plenty of cards waiting to be found -- it's just a matter of the direction you wish to take.

In addition to collecting oddball cards of all kinds, I have also collected Andy Pettitte cards for a long time. I went to high school with Andy in Deer Park, Texas, then left for the Army after my graduation in 1989. Andy graduated the following year and was drafted by the Yankees.

I wouldn't describe myself as an Andy Pettitte super collector because I lack most of his high-end cards. His rookie card, found in the 1993 Bowman set, is inexpensive enough. His minor league cards are also cheap; one that is probably undervalued is Andy's 1993 South Atlantic League All-Stars card, of which only 2,000 were printed.

Some of the most expensive Pettitte cards are pack-pulled autographs shared with other players. The 1997 Stadium Club Co-Signers card comes to mind, with Pettitte's signature on one side and Derek Jeter's on the other (these days the card will set you back around $250 or so). Topps released an Andy Pettitte/Paul O'Neill laundry tag/patch folding card in 2012, autographed by both and serial numbered to 10, which also sells in the $250 range. Needless to say, I don't own either of these! 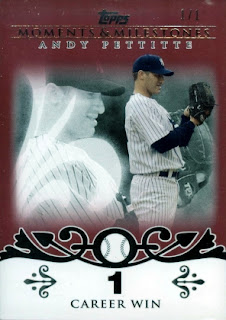 Of the 550-plus different Pettitte cards that I do own, the most unique one probably comes from the infamous 2008 Topps Moments and Milestones set. For those who don't know, this set was a horrible idea. For EACH of Pettitte's 201 wins at the time, cards serial numbered to 150 were printed. In addition, chase cards numbered to 25, 10 and 1 of 1 were also issued -- once again for EACH of the 201 wins! What was Topps thinking? Anyhow, I managed to get the 1 of 1 card commemorating Andy's first victory. I also snagged the 001/150 card commemorating his first victory, for what it's worth.

I still do the occasional search for unique Pettitte cards, and recently acquired one of his game used Astros alternate jerseys from the 2006 season. It was originally purchased from one of the big Minute Maid Park memorabilia sales by a local fan, who later sold it to me for a very fair price. It certainly beats the price of a game used Yankees shirt! 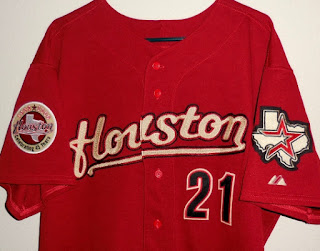 Damn, I'm getting old. Andy retired for good after the 2013 season, with a few additional cards of him being issued in some of the 2014 sets. Now that the Pettitte collecting has inevitably slowed down this past year, it was time to make a hobby-altering personal decision. I have decided to start collecting a young, fresh football player who I believe is destined to become one of the all-time greats. Understand that this decision will be controversial... Discussions will be heated. But it's time to move on and focus on a new single-player collection that I believe will be an interesting one to build. I'll reveal the name of this new collecting subject in my next post, but here's a hint... Know that I was born in New Orleans and have been an LSU fan most of my life.

Posted by Anthony Nunez at 1:14 PM No comments: 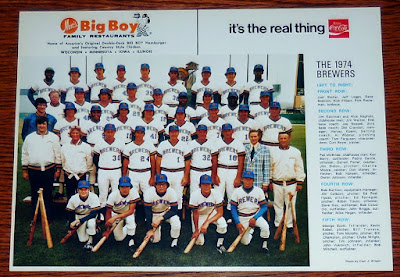 Every now and then, a sharp-eyed collector will find a scarce (or formerly scarce) item that surfaces in quantity on eBay. Often, the item will be quietly absorbed into the collections of hobbyists, with a minimal effect on the value. Other times, the newfound quantities will be large enough to lower the value of the item, as the supply vs. demand ratio has been permanently skewed.

Which of these two situations will occur is yet to be seen for the 1974 Marc's Big Boy Milwaukee Brewers Team Photo, which showed up in quantity this past month or two through the Kruk Cards store on eBay.

From what I can tell, this "card" has never been documented in any of the hobby reference books. FYI, I refer to this oversized  9" x 12 1/4" issue as a card, because it is printed on white, medium-weight cardstock. While this was apparently a premium for the local Big Boy restaurants in the Milwaukee area, little else in known. Restaurants were known to release sports-themed placemats during this era, but they were usually printed on paper versus the cardstock seen here. 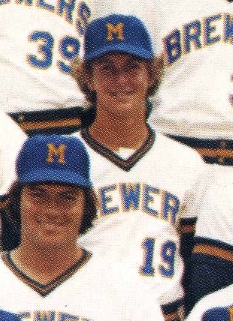 What makes this issue important to Brewers and Hall of Fame collectors alike is the fact that a young Robin Yount is pictured during his rookie season with Milwaukee -- a full year before the release of his first Topps card. Though Yount played in only 104 games with the club that year, he was fortunately included in the team photo shoot. And for those geeky collectors who are always on the lookout for scarce photos (I may or may not be one of those geeks), it is worth noting that the pic used on this Big Boy issue varies ever so slightly from the one found most often elsewhere. The biggest difference at a glance is of slugger George Scott, found in the upper left corner, who has his hand on his hip in the Big Boy photo. The more common version of the team photo shows Scott with his hand down at his side. Right below Scott is equipment manager Bob Sullivan, who is wearing a scowl in the Big Boy photo versus a smile in the common photo.

I won't speculate on the value here, but it's safe to say that Kruk Cards is virtually giving these away right now. I've seen Kruk buy large collections in the past, then turn around and unload unique items at very reasonable prices. I'm not sure how many '74 Big Boy Brewers photos were purchased by Kruk, but they seem to have more than a few in stock. Not knowing what they may or may not be worth in the future, I'll say as a collector to just grab 'em while you can at a reasonable price! 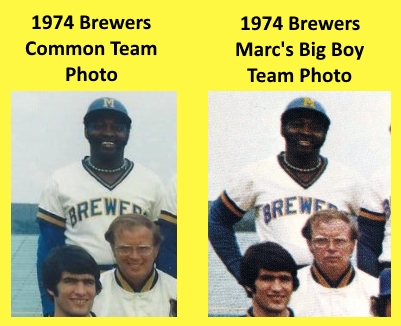 Posted by Anthony Nunez at 9:07 AM No comments: