The Georgetown Hoyas basketball team was the subject of yearly police card sets that were first issued during the 1981/82 season, and continued through the late 1990s (up to the 1996/97 season, I believe). Quick backstory: The modern police card era began with the NBA's 1977/78 Portland Trailblazers set, while with college basketball the first modern examples were released in 1980/81 for both the Arizona Wildcats and Wichita State Shockers; Georgetown followed with their first set a year later.

The 1981/82 Hoyas police set consists of 20 cards, and consists of fourteen players, four coaches, a team photo, and a mascot card. Card fronts feature black and white portraits, flanked by a dark, large blue border with white edges. Each player's name, uniform number, position, height, college year and home town are listed across the bottom fronts. Each card back features a basketball term and safety tip, as well as a Safeway sponsor logo across the bottom. Sets were printed on very thin white cardboard stock, which makes them very condition sensitive to corner wear and "toning" on the backs. 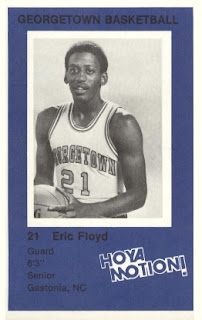 Whether by design or luck, Georgetown's first police set has the distinction of featuring a card of freshman center Patrick Ewing, who would of course go on to make eleven All-Star appearances in the NBA, be a two-time inductee into the Basketball Hall of Fame, and be voted to the NBA's 50th Anniversary All-Time Team (Ewing is also featured in the next three Georgetown police sets). Senior Eric "Sleepy" Floyd, who is also represented, went on to play thirteen productive seasons in the NBA. Another card of note is that of legendary head coach and Hall of Famer John Thompson, who guided the team quite successfully from 1972 through 1999.

These 80/81 cards seem to be pretty scarce. I have been on the police card prowl for many years, and rarely do I see these sets hit the market; even on eBay at the time of this writing, only one incomplete set and two graded Ewing singles are to be found on the entire site. I'm not sure if the production numbers were ever released for any of the Georgetown cards, but later Hoyas issues are certainly much easier to find than this inaugural set.


The next year's 1982/83 set is very similar in appearance, but lacks "GEORGETOWN BASKETBALL" across the top fronts of the cards. On the lower backs of the 1982/83 cards, the "GAMES PRODUCTION, Inc." name is found in the place of Safeway.

At one time, during the glory years of Patrick Ewing as well as the glory years of speculative card collecting, this 1981/82 set was known to sell in the $100 to $120 range. Today's value is more likely in the neighborhood of $75 to $100.

Random Fact: According to the back of the mascot card, collecting a complete set of these cards would have won two free tickets to a Georgetown basketball game. 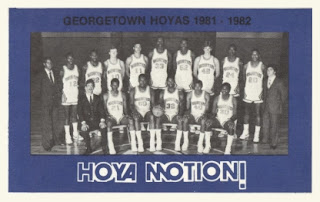 Posted by Anthony Nunez at 3:24 PM No comments: