These cards are typical of the police sets released during the first half of the 1980s. Measuring a bit larger than the standard card size, these measure approx. 2-5/8 inches wide by 4-1/8 tall. Cards were printed on soft white card stock with a nice coating of semi-gloss across the fronts. Every card but Hank Aaron and Terry Harper features a studio portrait with a neutral background (Aaron and Harper are pictured at the ballpark). Though the year of issue is mentioned nowhere on the cards, they are easily identifiable as '81s because of the green ribbon graphic found at the top right of each card front. A Police Athletic League logo is found at the top left; this logo appears on all six Braves police sets. Card backs feature Coca-Cola and Hostess logos, as well as a short player biography and a "Tip from The Braves." Cards are not numbered except for uniform numbers. 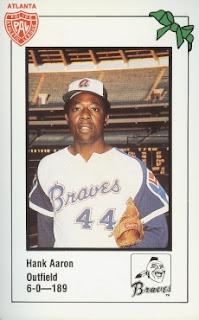 Braves fans were treated to good baseball in the 1980s, and this set offered a preview of what would be many of the key players. Infielder Jerry Royster, 1978 Rookie of the Year Bob Horner, Hall of Fame pitcher Phil Niekro, All-Star outfielder Claudell Washington and two-time NL MVP Dale Murphy are just some of the players who contributed to the success of the club during the first half of the decade. Hall of Fame pitcher Gaylord Perry is also found in the set, his lone year with the Braves. Four-time Manager of the Year and Hall of Fame skipper Bobby Cox is also pictured, one year before heading to the Toronto Blue Jays. Cox would return to the Braves in 1990, and the rest is baseball history with his fourteen first place finishes in fifteen years.

It was reported that 33,000 sets were printed. Allegedly, the Terry Harper card is a bit harder to find than the other cards; while it isn't scarce by any means, it is technically a short print. The Hank Aaron card, on the other hand, was triple-printed (I saw an uncut sheet several years ago to verify this) and is by far the easiest card in the set to find. This means that approximately 99,000 Aaron cards rolled off the presses back in 1981, and examples are easily found these days.

A NRMT complete set is valued in the $10 to $15 range today, including the "slightly" short-printed Harper. This set, along with the other five '80s Brave police issues, are loaded with quality cards and should be a part of every baseball oddball portfolio.