Anyone who collects baseball cards from the 1980s to early '90s is familiar with the fabled "boxed set." In a nutshell, these are small baseball sets that were produced by Topps or Fleer to be sold by specific retail chains. A colorful point-of-purchase display case would typically house 24 sets, with each set being cello-wrapped in an equally colorful cardboard box. Topps boxed sets typically contained 33 cards and a stick of gum, while Fleer boxed sets typically contained 44 cards and several stickers.

Sets of this nature were always named with a theme; "Memorable Moments", "Stars of the Decades", "All-Time Home Run Kings" and "Baseball Rookies" were some of the topics chosen for boxed sets. Thanks to the internet, it seems that no sets from this genre are difficult to find today. Though none of these boxed beauties are scarce, some are sought more by collectors than others... In particular, sets featuring rookie players that went on to have superstar careers are the ones with the most demand. 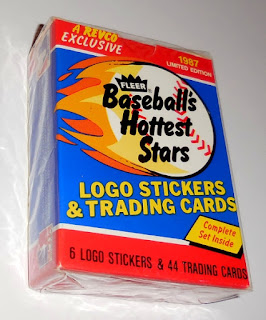 The most popular (and valuable) retail-chain boxed set today is the 1987 Fleer Baseball's Hottest Stars set. This 44-card issue was created exclusively for Revco Drug Stores, which was a large chain found mostly east of the Mississippi River. In typical fashion, this Fleer set features 44 cards, six baseball logo stickers, and comes sealed in a colorful retail box. A checklist of the players in the set appears right on the back of the box, which undoubtedly enticed Jose Canseco and Don Mattingly collectors of the day to grab a set or two.

Many of Baseball's hottest stars were indeed included in the set, including Hall of Fame standouts Mike Schmidt, Andre Dawson (NL MVP in 1987), George Brett and Rickey Henderson. Pete Rose even makes an appearance as first baseman/manager of the Reds. On the other hand, the inclusion of several players is questionable; Orioles outfielder Larry Sheets and Padres pitcher Eric Show are examples that were solid but average players. Numerous others were hometown favorites at best. But good, bad and ugly aside, there's one player in particular that makes this set the crown jewel of the entire boxed set genre... 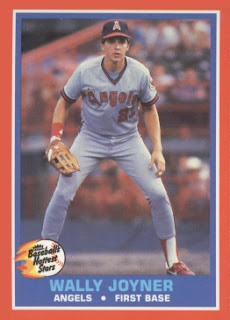 Fleer actually cheated a bit on their title of "Baseball's Hottest Stars," and added several promising rookies to the set. As always, several of these youngsters went on to have mediocre careers at best, while others achieved all-star status. Players featured in the set during their rookie-card year included Blue Jays pitcher Mark Eichhorn, Rangers outfielder Pete Incaviglia, Phillies pitcher Bruce Ruffin, Indians outfielder Cory Snyder, Dodgers outfielder Reggie Williams and Cardinals Pitcher Todd Worrell. Also featured during his rookie card year is Angels first baseman Wally Joyner, though Fleer got a jump on him the year before in their 1986 Baseball's Best boxed set.

Without a doubt, the aforementioned Barry Bonds would go on to become the most popular and collected player in the set. During the 2000-2005 MLB seasons, years after collectors had lost interest in most other boxed sets, the '87 Baseball's Hottest Stars set was selling in the $40 to $50 range. Today, the price has cooled considerably and the set sells in the $10 to $15 range on Ebay. Even so, this wonderful oddball issue remains the most celebrated set to emerge from a long bygone era of small, colorful, retailer-exclusive baseball card releases.

Random Fact: Revco, the drug store chain that originally sold these sets, was purchased by CVS in 1997. All Revco stores had either closed or were re-branded to CVS by the summer of 1998.

Posted by Anthony Nunez at 8:48 PM