This set is so rare -- and seemingly undocumented -- that one has to wonder if these cards were ever issued. I stumbled upon this set one evening whilst walking through the convoluted online garage sale known as eBay, and promptly added it to my collection with an unflinching click of the "Buy It Now" button. As far as researching the set, Google yields no clues whatsoever. Thankfully, the players and coach pictured on these cards quickly narrow down the year of issue here to 1993, the inaugural season of the Kickers in the USISL (United States Interregional Soccer League). 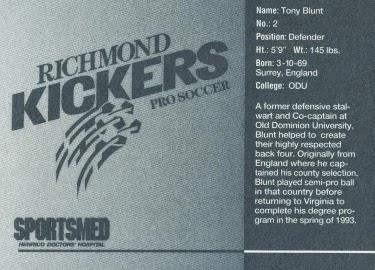 These cards are slightly larger than the standard size, measuring 2 5/8 across by 3 5/8 tall. The set we obtained features 21 unnumbered cards that were printed on semi-glossy card stock. Backs are printed in varying shades of green and give a short bio of the subject listed. The set was sponsored by the "Sportsmed" division of the Henrico Doctors' Hospital. Cards are not numbered except for player uniform numbers.

A few players went on to perform at the MLS level, including goalkeeper Scott Budnick, midfielder Mike Huwiler, forward Rob Ukrop and midfielder Richie Williams, who played eight productive seasons with D.C. United and Metro Stars.  Forward Leigh Cowlishaw was the first player to have his number retired by the Kickers, and is still involved with the franchise today as their successful coach. Bobby Lennon co-founded the Kickers with Cookie Ketcham, both of whom are pictured on cards in the set.

It's hard to put a price on a set that collectors don't know exists. I'm sure that die-hard Richmond fans would have an interest, and regional oddball collectors as well. All I can say is grab one when ya find it.