Team-issued baseball postcards that were given away and sold during the 1960s-1980s era are all but impossible to checklist accurately. There are a few reasons for this. For starters, many teams would add or subtract players from the sets as needed during the season. This was usually done informally, with few efforts made to alert collectors of any changes. Often the basic design of these sets would not change for several years, meaning a team could carry over their remaining postcard inventory to their next set the following season. Yet another twist is when a team would run out of a player's card in the middle of the season, and order up new cards that were different than the previous ones.

A collector who ordered their set in May might receive a set that was significantly different than one ordered in September.

Consider the above writing a disclaimer; I have no way of knowing if I am indeed presenting the complete 1985 St. Louis Cardinals team-issued postcard set. But here goes nothing. 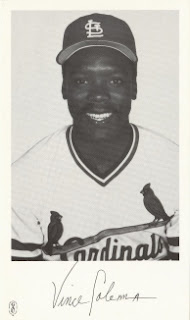 My set consists of 32 black and white postcards, featuring a manager, six coaches and 25 players.  Each measures approx. 5-1/2 by 3-1/4 inches and the backs are blank. A facsimile autograph is featured at the front bottom, just below the large, posed portrait of the subject. Regarding the design of this set, this is a perfect example of a team that used the same look for several years (and has undoubtedly caused much collector confusion for over 30 years).

The '85 Cards were a heck of a baseball team, as evidenced by their appearance in the famous "I-70 Series" versus the Royals that October. Their postcard set does not disappoint, including all the starters and stars such as Ozzie Smith, Vince Coleman, Tom Herr, Andy Van Slyke, John Tudor and NL MVP Willie McGee.

Speaking of the base-swiping Coleman, he is pictured here during his rookie season and would not appear on a major card release until the late-year update sets were printed. Infielder Terry Pendleton is pictured the same year as his Topps, Donruss and Fleer rookie cards. On the flip side, light-hitting veteran infielder Ivan DeJesus is pictured during his lone year with the Cardinals, where he managed to spray a mere 16 hits in 78 plate appearances.

My postcard set features pitcher Neil Allen, who was sold to the Yankees on July 16, but does not have outfielder Lonnie Smith, who was shipped to the Royals on May 17 (I'm not sure whether Lonnie was in the set or not prior to that date, but he was the starting left fielder).

One can see how  frustrating it may be to research postcard sets.  I'm aware of a few collectors back in the 1970s and '80s who attempted to chronicle them, but I've never been privy to their work... It would be nice to see the fruits of their labor published online.

Posted by Anthony Nunez at 7:08 PM