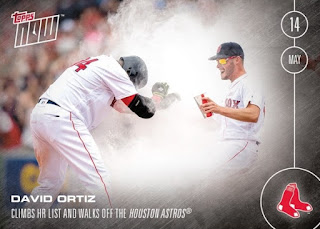 As the 2016 Topps NOW Baseball set continues to rapidly expand, collectors are closely monitoring the newly released cards on a daily basis. New records for both the highest and lowest print runs have been set since we reviewed the first fifty cards not quite a month ago. Numbers geeks such as myself are having a ball in the process.

If you happen to be unfamiliar with the the Topps NOW concept, we talked about it in this blog post. Basically, collectors have a 24 hour window to order a Topps NOW card, by logging on the the Topps website. Topps announces the print run of each card shortly after the ordering window has closed. It has been fascinating, to say the least, to follow the print runs and values of these cards thus far this season. 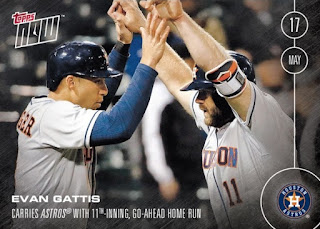 Let's look first at the lowest print runs up to this point. Astros designated hitter Evan Gattis  holds the distinction of having the fewest cards printed to date, with a mere 212 copies distributed to commemorate his game-winning home run on May 17. Right on his tail is Mariners catcher Chris Iannetta, who had 215 cards printed to also honor a game-winning homer; this time on May 11. While both players certainly deserve a card in the set, neither is known as a player with great offensive numbers and both play for teams with smaller fan bases. The card that features the third lowest print run is somewhat of a surprise to me; budding star Stephen Piscotty and seasoned vet Matt Holliday of the Cardinals share a NOW card with a print run of just 217 examples. From there the trend set by Gattis and Iannetta continues, with Padres outfielder Melvin Upton Jr. having a print run of 226 for a card that commemorates his game-winning home run on April 16.

Here's a look at the sixteen cards with the lowest print run thus far (Liriano and Davis are tied for fifteenth place): 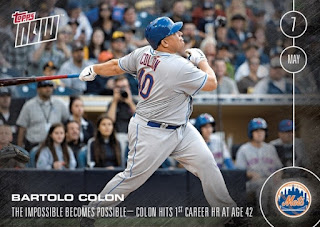 The largest print runs make for an interesting study. For starters, the first five cards with the highest runs all feature pitchers... And the current king of the Topps NOW castle isn't even close. Mets pitcher Bartolo Colon set an MLB record on May 7, when he clubbed his first home run at the age of 42. In response, the NOW card created for Colon's feat was purchased in incredible quantities; a whopping 8,826 copies were sent out to collectors. Nats ace Max Scherzer comes in a distant second with a run of 3,746 cards to note his 20 K performance on May 11.  Colon's Mets teammate Noah Syndergaard currently holds third place with a run of 3,670 cards to commemorate his spectacular showings on both the mound and the plate on May 11, coincidentally on the same day as Scherzer's aforementioned performance.

The fifteen highest print runs thus far are as follows: 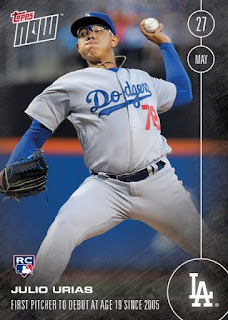 Seven of the fifteen cards with the highest print runs feature the "rookie card" designation. The rookie with the fewest cards printed thus far is Mariners slugger Dae-ho Lee, who smacked a game winning home run on April 13. At 33 years of age, Lee already has fifteen seasons of foreign professional baseball experience under his belt and is obviously predicted to have a short MLB career. Nomar Mazara's second card in the set (#47) has a print run of just 468, and has the potential to be a "sleeper." Having just turned 21, one might expect to see highlights of Mazara for the next fifteen or so years. On the high side of the print run, nineteen year-old Dodgers pitcher Julio Urias, who made his MLB debut on May 27, is featured on card #102 with a run of 2,992 copies.

Regarding values, the Bartolo Colon home run card (#57) sold for upwards of $50 in the days immediately following it's release on May 8. It has since cooled down to the $20-$25 range, and I expect it to drop to ten bucks by season's end. Trevor Story has four cards in the set thus far, with his first one (#4) being the hottest. Also briefly selling in the $50 range at one time, this card can currently be purchased on eBay for $15 or less. The first two NOW cards released, Francisco Liriano (#1) and the Kansas City Royals (#2), each sell for $35 or higher when they appear on eBay. Only a few examples of each have found their way to the secondary market as of now, which helps to account for their seemingly high values.

It'll be time to review the first 150 NOW cards soon enough. I doubt that King Bartolo and poor E-Gatt will be knocked from their titles as highest and lowest print runs, but you never know. I hope everyone enjoys what they collect, and the best of luck to you with your search!

Posted by Anthony Nunez at 9:06 PM