The San Diego Chargers were the subjects of two classic (and somewhat scarce) police sets released in 1981 and 1982. After a five year hiatus, they were back in 1987 with the release of their third police set, sponsored by the Chargers and Oscar Meyer. Though numbered on the card backs to number 22, there are only 21 cards in the set as card number 13 was pulled before distribution.

Card fronts feature a large color photo with tri-colored borders. A Chargers helmet sits at the lower left, while the players' names, positions, uniform numbers and physical info are found across the remainder of the bottom. Backs are printed in black and feature short player bios, a "Chargers Tip," and the Oscar Meyer logo. Surprisingly, no police department is mentioned on the cards. 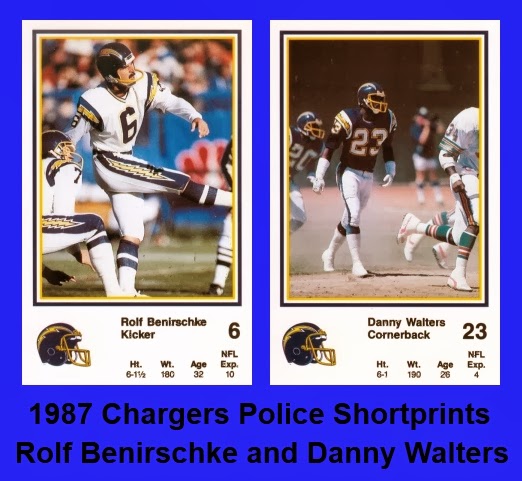 In addition to the phantom number 13 card, two others were pulled shortly after distribution began, making both shortprints the two most valuable cards in the set. The shortprinted cards feature kicker Rolf Benirschke, who retired before the season began, and cornerback Danny Walters, who was arrested on September 14 of that year for possession of cocaine and driving under the influence. These cards are considered a part of a complete set.

The set is loaded with star and superstar players, including Hall of Famers Dan Fouts and Kellen Winslow. We would love to get a hold of an uncut sheet and take a peek at who was pictured on the unreleased card number 13... Our guess would be Hall of Fame wide receiver Charlie Joiner, who retired well before the 1987 season began. Regarding value, the current price range for a complete 21-card set is $15 to $20.