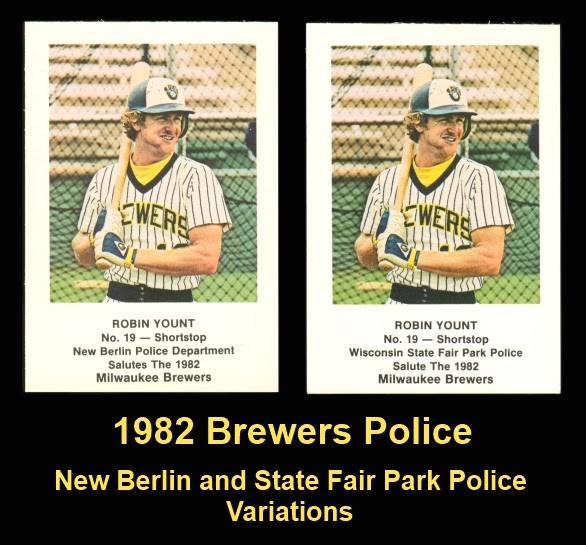 The endless sponsor variations of Milwaukee Brewers police sets released from 1982 to the present make it virtually impossible to collect the entire run. There's little to no chance of completing a master collection.

I'm not joking. You'd have a better shot at spending the weekend with Selena Gomez.

The promotion began in 1982, which is the year we will focus on in this post. This first year of 1982 saw the printing of five sponsor variations. But before we get into that, let me mention the basics... 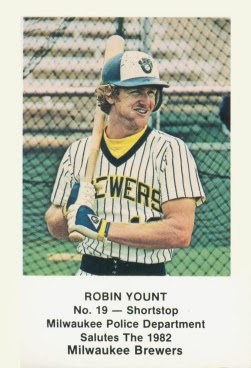 Brewers police sets typically consisted of 30 cards (the first exception wasn't until 1995, when the set had 33). Even though there were several different sponsors listed on the cards each year, the player selection and photos were always the same among the sets. Because of this, only the most dedicated of collectors are interested in the different sponsor variations, with most of them being single-player specialists.

I have personally never seen a complete checklist for this run of Brewers sets, and the couple of hardcore collectors I know who are working on this herculean task are in no danger of completing their collections anytime soon. The Milwaukee Police Department is always the easiest sponsor to find (sometimes having 100,000 sets or more printed), while some of the more obscure departments may have printed as few as 500.

Needle in a haystack? At best.

Focusing in on 1982 again, I know of five departments that participated in the inaugural promotion: Milwaukee PD, New Berlin PD, Brookfield PD, Wauwatosa PD and the Wisconsin State Fair Park Police. As usual, the Milwaukee PD version is the easiest of the five to find, with New Berlin, Brookfield and Wauwatosa being somewhere in the middle. And finding the Wisconsin State Fair Park Police set, you ask? 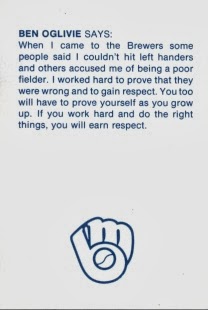 The scans above show three Robin Yount cards, each with a different sponsor printed across the bottom. As noted before, the photo and player selection is the same in each of the sets. Also shown here is a New Berlin back, which is how most of the 1982 backs appear (the Milwaukee PD backs have an extra badge graphic on theirs, if anyone cares).

The 1982 Milwaukee PD set is valued in the $10 to $15 range. It's hard to put a price on the others, due to both the limited supply and limited collector demand. In this type of tricky scenario you might see a set appear with a $5 Buy It Now on Ebay, or the same set might appear (and be sold) with a $50 Buy It Now. All I know is that I like collecting these, and will continue hunting down Brewers Police Sets at prices I can live with on a case by case basis.

Posted by Anthony Nunez at 5:54 PM