I'll never forget the first time I read the name "Ken Griffey Jr." and saw his picture. As a matter of fact, I'll show you. It was in this advertisement for Tuff Stuff magazine, which was featured in a mid-1988 issue of Sports Collectors Digest. Here it is: 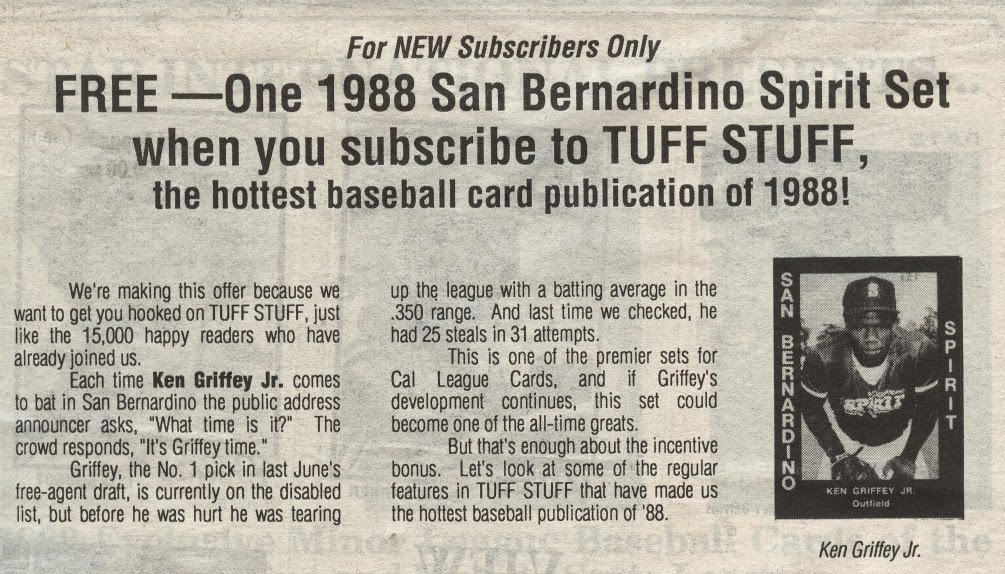 That's right. If you subscribed to Tuff Stuff magazine during this promotion back in 1988, this gem of card, as well as the rest of the 1988 Cal Cards San Bernardino Spirit set, was yours. Looking back now, we must applaud the Tuff Stuff marketing department for choosing an all-but obscure set in 1988, a year before Griffey made his first appearance in the majors with Seattle... After all, Gregg Jefferies and Roberto Kelly were much more popular with speculators at the time.

But enough about me and Roberto Kelly.

Cal Cards produced a modest run of California League team sets from about 1988 to 1991-ish, snagging a few future superstars along the way (Pedro Martinez and Mike Piazza come to mind). The designs were a bit basic, and maybe even quietly classic. Minor League cards and their collectors had been enjoying steady growth since the early 1980s, and some Minor League teams even had three different sets produced for them in one season. The '88 Spirit team were carded by two companies, Cal Cards and Best. Best produced two versions of their set, with their special "Platinum" edition being limited to just 1,300 numbered sets. At the height of Griffey mania, an example of this Best Platinum set was known to sell for $650.

But enough about Best Platinum sets.


The 1988 Cal Cards Spirit set consists of 28 cards, which are actually numbered from 28 to 55 on the backs. Though each team set was sold separately, Cal Cards adopted the numbering method used by most Minor League card producers at the time, which was to number their cards among the team sets to reflect one large complete set. Each team set produced that year was given it's own border color, and San Bernardino was assigned a dark blue border. Though Griffey is obviously the big name in the set, others from this "A" level club went on to have varying degrees of success in the majors. Rich DeLucia, Dave Burba, Jerry Goff, Jim Bowie and Pat Rice all made it to the bigs. Pitcher Jeff Nelson stuck around the majors for fifteen seasons, including an All-Star appearance with the Mariners in 2001, and four World Series rings with the Yankees (1996, 1998, 1999, 2000).

I should probably mention that an unlicensed Griffey card was made to look like his 1988 Cal Cards issue. It began showing up in the hobby around 1990, and has unfortunately fooled more than a few collectors. Thankfully, the card features a photo of Griffey that is completely different than the one found on a legit Cal Card. In addition, the information found on the back of the bogus card was completely re-typed, as opposed to being photocopied. The differences can be easily seen when comparing the two backs side by side, with the card number "34" being much fatter and mushed-together on the fake. Here's a look at a legit and fake Griffey, compared next to each other: 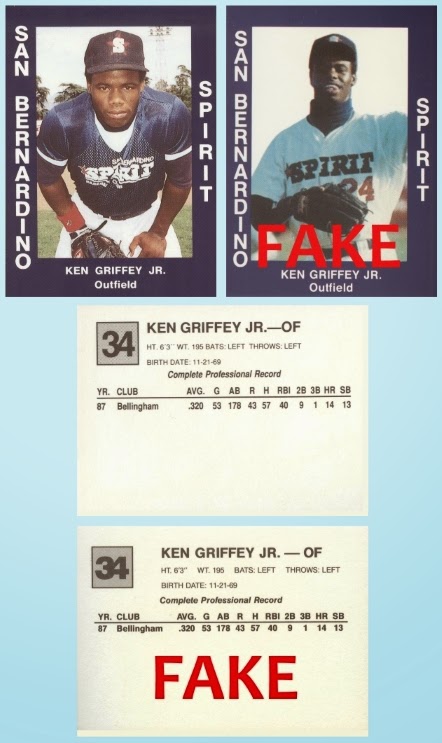 The set can be found today with little trouble for $40 or less... Keeping an eye open for "auction" formats on eBay can net you one for considerably less.  When you compare the relative scarcity of this Griffey versus the number of his rookie cards printed in 1989 by Donruss, Fleer, and even Upper Deck, you'll be wise to slip one of these sets in to your collection.

Posted by Anthony Nunez at 3:39 PM