The cards pictured above are from the 1980 Dallas Cowboys Police set, which was distributed by local DFW area law enforcement agencies during the '80 NFL season (If these don't look like the cards you're searching for, we've also blogged on the 1979 set, 1981 set and 1983 set). A complete set consists of fourteen player cards. None of the subjects featured in the inaugural 1979 set are included here, so adding both sets to your collection will net 28 different players, plus Hall of Fame coach Tom Landry ('79) for good measure.

Football collectors will remember that the Topps Company produced the only nationally-distributed yearly football card set until 1989, so many deserving players were denied spots in the too-small Topps football sets of the day... Enter the likes of the 1980 Cowboys Police set, where several of these under-appreciated soldiers were able to gain a bit of recognition. 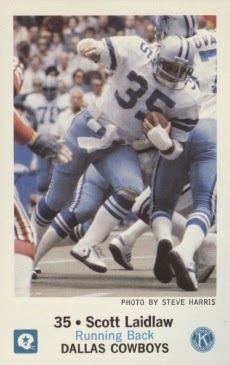 Running back Scott Laidlaw played six seasons in the NFL (1975-80), but was represented in a Topps set only once, in 1977. Hall of Fame tackle Rayfield Wright labored for Dallas from 1967 through 1979, but only appeared in five Topps sets during that time (1972-76). Defensive tackle Larry Cole is perhaps the poster child of the "Topps snub," appearing in just two Topps sets (1975 and '76) during a thirteen-year career with the Cowboys that lasted from 1968 to 1980.

The fourteen Cowboys here are represented with beautiful action pics provided by photographer Steve Harris... Incidentally, another complaint often heard from football collectors was the lack of action photos found within the Topps sets -- bench and sideline shots were found on the majority of Topps football cards in the 1970s and 1980s.

Card backs feature a large rectangle with a "Cowboys Tip" across the body, along with a list of sponsors across the bottom (Kiwanis Club, Area Law Enforcement Agency and Dallas Cowboys Weekly). The cards are unnumbered with the exception of the players' uniform numbers.

Regarding scarcity, these cards were produced in modest quantities. While certainly not considered a rare set, today's market isn't flooded with an excess of 1980 Cowboys Police cards. A reasonable value for the set is in the $12 to $15 range.