Topps went full steam ahead with sports stickers in 1981, releasing a set of 262 Major League Baseball players and a set of 262 National Football League players. These stickers were sold in sealed packs of five, and an optional album was available to house them.

A lesser-known football sticker set was also made available by Topps in 1981, which featured just 28 players (one per NFL team). Considered by some collectors to be a test issue, these somewhat scarce stickers feature red borders and a large, color photo of each player. Unlike the regular stickers mentioned above that were sold in packs of five, we believe these red border beauties were sold as singles inside small, plastic gumball machine containers. Many of the stickers we see today are in high-end condition, meaning they were never stuffed inside the capsules. 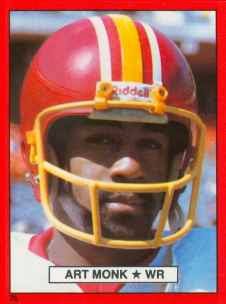 Topps did a nice job with their player selection, including a balanced blend of young stars and superstar veterans. Hall of Fame wide receiver Art Monk is featured in his rookie card year, along with running backs Billy Sims and Joe Cribbs, and quarterback David Woodley. Hall of Famers Walter Payton, Tony Dorsett, James Lofton, Jack Youngblood, Franco Harris, Steve Largent and Lee Roy Selmon each contribute to the value of this oddball offering. A Joe Montana rookie sticker would have been a welcome addition indeed, but entering the 1981 NFL season Montana had only started seven games for the 49ers, making it understandable why Topps would instead choose veteran wide receiver Freddie Solomon to represent San Fransisco.

Red border stickers are the same size as their "regular" cousins, weighing in at 1 15/16 by 2 9/16 inches. Stickers are numbered 1 through 28 on the fronts and backs. Backs feature a small amount of biographical information and the 1981 copyright date. A light watermark from the MACtac Corporation of Soignies, Belgium can also be found on the backs of the stickers. Still going strong today, the graphics and label printing company continues to employ over 19,000 workers worldwide.

Ebay is a fairly accurate barometer to gauge how scarce an oddball set might be, especially when you keep an eye open over the course of weeks, months and years. A small hoard appeared on the site about a year ago (maybe ten or so sets), which allowed me to purchase my set for ten dollars delivered. With that event being long gone, complete sets seem to be elusive and offered in the $25 range. A nicely-centered Walter Payton could easily be worth $10 or more by itself.