Who doesn't love Topps baseball cards from the 1980s? If you say "I don't," you can just walk your ass out of here and find something else to read. Perhaps you may wish to see how your favorite movie is faring at the box office. For the rest of us, great things await within the cards known as the 1982 Topps/Coca-Cola Cincinnati Reds set.

Consisting of 22 player cards and a header, the Reds were one of two MLB teams (the Red Sox were the other) that continued a regional card promotion with Coke for the second year in a row. These team sets were increased in size from twelve cards in 1981, to 23 cards in 1982. The design of the Coca-Cola cards are quite similar to the regularly-issued Topps baseball cards from the same year, with the most obvious difference being the large "Coca-Cola" logo found at the top of each card front.

When comparing the fronts of several of the cards, the Coca-Cola logo is the only difference between the Coke set and regular Topps set. On others, however, major differences can be seen, to include different photos, different teams, different haircuts, and in the case of outfielder Clint Hurdle, all of the above. 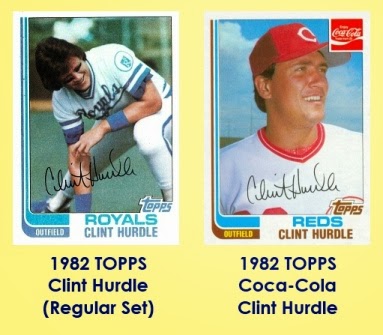 Here at the Oddball Card Collector Blog, we've always been fascinated by oddball sets that went the extra mile to include updated teams and photos for players on the move. By our count six players here fit the bill, as in the regular 1982 Topps set Clint Hurdle was pictured with the Royals, Cesar Cedeno with the Astros, Greg Harris and Alex Trevino with the Mets, Wayne Krenchicki with the Orioles and Jim Kern with the Rangers. Another card worth noting is that of outfielder Paul Householder, who was forced to share the spotlight on three-player "Reds Future Stars" cards in both the regular '81 and '82 Topps sets.

A long-forgotten promotion can be found on the back of the header card: 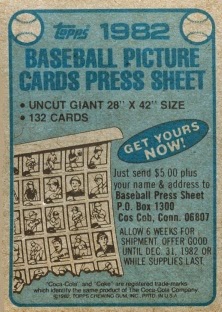 For just five dollars, collectors could receive a full-sized, uncut sheet of 132 Topps baseball cards. Many of the sheets sent out in the promotion were considered printer "scrap," due to errors such as color runs and imbalances, register problems and wrong backs. To this day, it is common to find many of the uncut sheets from this era available for sale on Ebay that contain one or more of these printing flaws.

The set can usually be picked up for five dollars or less. Considering the likes of Johnny Bench, Tom Seaver and Dave Concepcion are found within the set, it's hard to see the downside of slipping one of these into your collection. 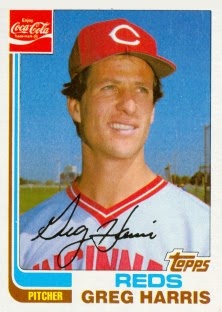