The modern era of police giveaway sets featuring athletes began in 1977/78, with the release of the Portland Trail Blazers basketball set. One of the first baseball examples is the 1979 San Francisco Giants set, which was issued both as a stadium promotion and a giveaway by police officers in the San Francisco area.

Here's a look at the Willie McCovey card from both sets: 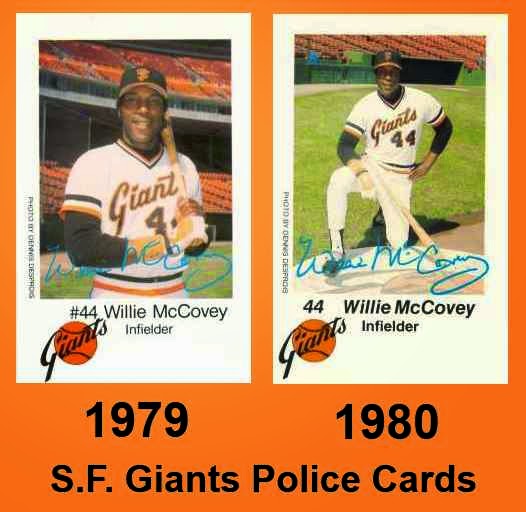 Both sets were sponsored by KNBR 68 radio, and feature baseball terms and safety tips on card backs. The 1979 set is complete at 30 cards, which includes a manager card and four coaches cards. Fronts feature color photos taken by longtime Giants and 49ers photographer Dennis Desprois. Cards are not numbered except for player uniform numbers.

Loaded with all the big and small names of the day, baseball fans will be happy to find the likes of Willie McCovey, Jack Clark, Vida Blue, Bill Madlock and Darrell Evans within their 1979 set. More than enough sets were printed to handle today's demand, and a complete set should cost no more than ten dollars in the current market.