Some oddball sets are cooler than others. They just are. In this case, we'd say the 1992 Marathon Chicago Cubs set is the coolest of the cool.

Marathon Oil sponsored a Cubs set for five consecutive years, from 1989 through 1993. The 1992 issue features 28 cards and was given away at the July 10 game against the Atlanta Braves (John Smoltz pitched a complete-game shutout, out-dueling future teammate Greg Maddux in the process).

The large card size (4 1/2 by 2 7/8 inches) may be a turn-off for some collectors, but the design and large action photos across the fronts seem to work just fine in my opinion. Backs feature full minor league and major league statistics, as well as the player's birth date, height, weight and uniform number. The Cubs and 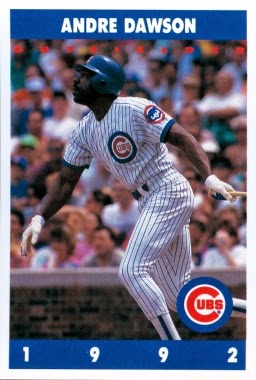 Marathon logos are found across the bottoms (An American Company Serving America!) The cards are not numbered.

Even casual baseball fans will be impressed by the many names found within this beaut of a set. Hall of Fame players Andre Dawson, Greg Maddux and Ryne Sandberg lead the list of superstars, while retired Hall of Famer Billy Williams makes an appearance on the coaches card. Joe Girardi, Shawon Dunston, Dwight Smith, Jerome Walton, Sammy Sosa and Mark Grace helped to fill a lineup that was truly impressive on paper, but in the end the club would finish with a paltry 78 wins versus 84 losses. The Braves were the biggest "thorn in the side" of the Cubs in 1992, with the Cubs winning just two of the twelve contests played against Atlanta that year.

We'd estimate the value of the set in the $5 to $8 range. Whatever you pay, consider it money well-spent... The "cool factor" of your collection will have just gone up substantially.

Posted by Anthony Nunez at 2:26 PM