Many collectors are unaware of Upper Deck's quiet venture into the stadium giveaway card business in the 2000s. We have already profiled two of these, the 2001 Washington Redskins set and the 2004 San Diego Padres set. Because of the local nature of these issues, and the fact they were not packaged for retail sale, stadium giveaway sets have always - and will continue to - fly under the collector radar.

The Oakland Athletics commissioned such a set during the 2007 MLB season (I have not been able to determine the date of the giveaway). Consisting of 25 cards, the set came in a clear plastic wrap. The design of the cards is very similar to Upper Deck's regular 2007 Baseball issue, with one difference being a small "The Mercury News" logo found at the bottom of each card front. Cards are numbered on the backs, but match the player's uniform number. Finally, these giveaway cards are foil-free, whereas the regular cards feature silver foil stamping on card fronts for both the player names and the Upper Deck logo. 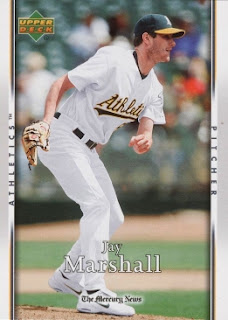 Oddball geeks love this type of hybrid set. At first glance, the cards can be easily mistaken for the regular '07s... But additional research reveals a major difference, much more significant than different card numbers, a lack of foil or a Mercury News logo; we're talking about five cards that were not found in the regular set at all. Manager Bob Geren, pitcher Lenny DiNardo, pitcher Santiago Casilla, designated hitter Jack Cust and catcher Kurt Suzuki are unique to the stadium giveaway.

Pitcher Jay Marshall did not have a regular Upper Deck card that year card per se, but was included in the "Rookie Exchange" set that was obtained with a redemption card; these 20 cards were inexplicably numbered as part of the regular set. Regardless, the photo used on Marshall's SGA card is different than the one found in the Rookie Exchange set.

I am indeed one of those oddball geeks who like finding cards that feature new photos and additional players. I also like cards that feature players who spent just a short amount of time with a club; in this case, Hall of Fame catcher Mike Piazza is captured at the end of his career and during his single season with Oakland. Outfielder Shannon Stewart is also featured during his lone year with the club, before moving on to Canada to finish out his MLB career in 2008 with the Blue Jays.

Though the set is everything the oddball collector looks for, it's not an expensive one. The current value is in the $5 to $8 range, possibly because most collectors don't know they want one. 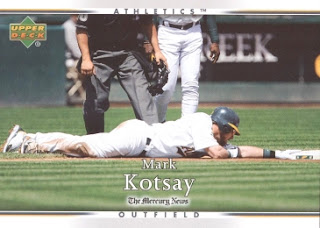