The Asheville Tourists minor league baseball club became the "A" league affiliate of the Colorado Rockies back in 1994, and has maintained the position ever since. The Tourists released a set of 30 cards early on in the 1995 season, featuring players and staff members that were current at the time. An update to that set would be released a few months later, adding another fifteen cards to the mix.

With an announced print run of just 1,000 sets, this update issue is fairly tough to find. Sets were factory-wrapped in clear, graphics-free cello. Young prospect Todd Helton was the card found on the front of the pack, with slugger Derrick Gibson appearing on the back. As it would turn out, Helton and Gibson would be the only two players from the update set to make it to the majors. 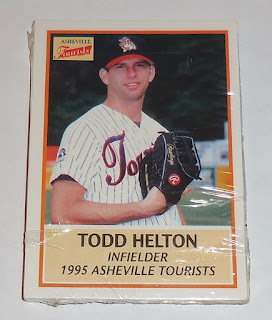 The cards from the update issue are virtually indistinguishable from those found within the regular 30-card set. The cards are numbered on the backs based on the player's uniform number, meaning several cards share a number between both sets. Printed on white, medium-weight cardstock, fronts feature a large color photo and and orange border. Nowhere is the printer of the cards mentioned.

Todd Helton is the primary reason for the value of the set today, which is in the $15 to $20 range; the 1,000 set run doesn't hurt the value either. One reason the set isn't worth more, however, is because of two earlier Team USA cards of Helton found in the 1993 Topps Traded set and 1993 Bazooka Team USA set.

Random Fact: Outfielder Derrick Gibson appears in both the '95 Asheville regular and update sets. He led all of Minor League Baseball in 1994 with 115 RBI, and tied the league lead with 32 home runs. His time in the majors  would be short, however, appearing in just seven games for the Rockies in 1998, and ten games in 1999. Gibson's final season in baseball was in 2006, with New Haven County of the independent Canadian-American Association.

Click here to hunt for 1995 Tourists cards on eBay 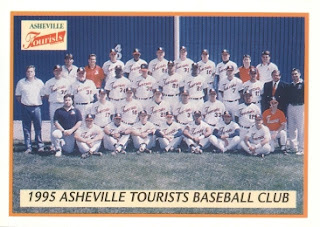