If these cards aren't the ones you're looking for, take a peek at the 1980 Buccaneers Police Set. The easiest way to tell the difference between the two sets is to look at the backs. The 1980 cards will have either a Coca-Cola or Paradyne logo, while the 1984 cards have neither.

The Tampa Bay Bucs, in conjunction with local area law enforcement agencies, released a second local "police" set in 1984 (the first one was the '80 set linked above). Both sets are complete at a whopping 56 cards each, which allowed a buttload of players the chance to make their lone card appearance as a professional NFL player.

Police sets from the late 70's to mid 80's had a general format for both the card fronts and backs, and this set followed the said formula faithfully. Fronts feature a large photo and basic biographical information for the pictured player. A small Bucs helmet with an old-school two-bar facemask is also featured on card fronts. Card backs feature a football definition and a safety tip that warns kids not to be kids ("When you fly a kite, stay away from overhead wires!") The three sponsors listed across the bottom are The Greater Tampa Chamber of Commerce, Community Security Council and Your Local Law Enforcement Agencies. The cards are not numbered.

One opportunity we feel this set missed was the chance to show the players in all of their Sunday glory on the playing field -- every player card except for one features a boring studio closeup shot, and the players are shown wearing either a blank orange jersey, or a shirt that has a number that isn't theirs. The lone exception on a player card is that of linebacker Danny Spradlin, who may or may not have existed, and who is pictured on his card in full pads and helmet. To the credit of the set, extra action cards of running back James Wilder, defensive end Lee Roy Selmon, linebacker Hugh Green, and the overall defense were added to the set to spice things up a bit. Cards were also made for the Shwash-Buc-Lers cheerleading squad, head coach John McKay and team owner Hugh Culverhouse.

Any Bucs fan, police set collector or obscure player enthusiast should seriously consider grabbing these cards. With larger, more inclusive nationally-released football sets still being a good five years away, many players made their lone cardboard appearance in this '84 gem of an oddball set. Kicker Obed Ariri, offensive tackle Ken Kaplan, running back Melvin Carver, our friendly linebacker Danny Spradlin... The list seemingly goes on and on. Add to that the large number of veterans pictured for the first (or only) time with the Bucs, and now you're really talkin' football. One example is offensive guard Steve Courson, who snagged two Super Bowl rings with the Pittsburgh Steelers in 1978 and 1979, and played for Tampa during the '84 and '85 seasons. Courson was never pictured on a Topps card, but did manage to make the 1983 Steelers Police Set. Offensive tackle Ron Heller is pictured here as a Buc during his rookie season, and would not receive a Topps card until their 1989 Traded Set was issued five years later (when he was pictured as a Philadelphia Eagle). 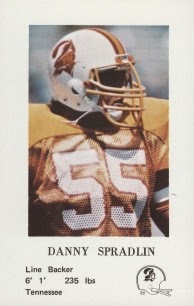 This set is probably easier to find than it's older 1980 brother, but you still won't see these all too often. After being released in modest quantities over thirty years ago, the supply has seemingly dried up, and to our knowledge no large hoards of these have ever been dumped on the market. Random singles can be found here and there, but complete sets seem to be fairly elusive. Regarding value, the lack of superstar players keeps the set price reasonable. Hall of Fame defensive end Lee Roy Selmon is the biggest name to be found, with a trail of respectable players following somewhere behind (quarterback Steve DeBerg, coach John McKay, running back James Wilder, linebacker Hugh Green).


We'd estimate this set to be somewhere in the $50 range, give or take a few bucks to the right buyer. How do you go about finding a set if you'd like to add one to your collection? Well, the answer is simple...