The Oddball Card Collector loves the 1970s and 1980s... Good times were had by all -- well, maybe not by New Orleans Saints fans, but these times were otherwise fun enough.

But what about the countless oddball sets that have been released in the new millennium? Surely there have been sets created these past few years that deserve a mention?

Of course there are. Actually, all of them deserve a mention on this humble blog... So many cards, so little time... With that in mind, it was time to find something produced since the birth of the smartphone. A reach into the shoebox yielded this random set from 2014 -- a nifty Green Bay Packers Police set. 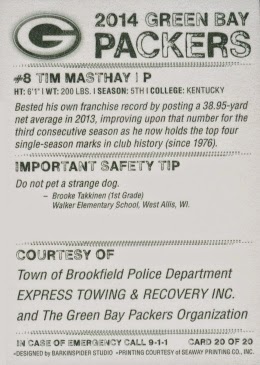 These Packers Police sets have basically been produced yearly since 1983, and have been sponsored by an endless variety of Wisconsin police departments. Any given year, up to a dozen or so variations may be created as the various law enforcement agencies are listed somewhere on their cards. Some versions are scarcer than others, depending on the number of cards ordered by each agency. Other than the small area on the card listing the sponsoring agencies, everything else on the cards are otherwise the same (the rosters, photos and designs are all the same). Only the most serious of collectors attempt to track down the innumerable police department variations produced for the Packers sets these past thirty-plus years, and for the most part there seems to be no premium value attached to the various departments.

The 2014 version of the set consists of 20 cards, and as the back of this card shows, the set in our collection comes from the Town of Brookfield Police Department (we're not sure which other agencies distributed the cards, but we'd be interested in getting a hold of those, too). Fronts feature a unique brushed metal look to them, though these cards are made of simple cardboard and ink. Each is numbered "Card XX of 20." 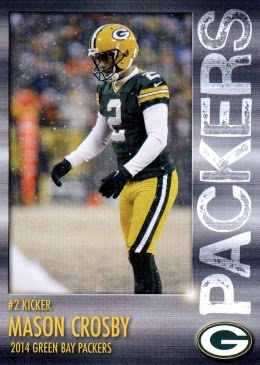 The nucleus of an awesome Green Bay club is represented in this set, and boy, what a powerhouse of an NFL team these guys are. You might need to go all the way back to the 1981 Steelers Police set to find such an impressive roster of "kick yo' ass-edness." Quarterbacks Aaron Rodgers and Terry Bradshaw... Running backs Eddie Lacy and Franco Harris... Wideouts Jordy Nelson and Lynn Swann... Linebackers Jack Lambert and A.J. Hawk... Seeing both teams play head-to-head would surely be a game to remember.

I'm pretty sure that the old way of distributing police cards are long gone (find a cop, get a couple of cards), and at this point you'll typically find mint complete sets as opposed to random singles. The quality control of this set rates very close to a "10", and our set is free of printing defects, centering issues or bad corners/edges. If you're going to add a set to your collection, make sure your cards are uncirculated and mint!

I'd give the set a value of $5. These cards are easily available on eBay as of this writing, and the low value is due more to lack of demand than gazillions of cards being printed. I'm sure these sets were printed in reasonable quantities, especially for the smaller police agencies.

Whichever agencies those may be.