Southern California was the place to be in the early 1980s... Be it the emerging metal music scene on the Sunset strip, or Ponch and Jon roaming the streets to save us from outlaw motorcycle gangs and similar ilk, excitement was always on the radar in the Greater Los Angeles area. Football was another ingredient that could be found in the local bowl of thrills of the day, with the Rams representing the NFL in L.A. from 1946 through 1994.

The Rams were an early adopter of the modern-day police set, as they released their 14-card set during the 1980 football season (the Dallas Cowboys, Kansas City Chiefs and Seattle Seahawks each released sets the season prior, and are considered to be the first three modern football police sets). Featuring thirteen players and head coach Ray Malavasi, the nucleus of the Rams' 1979 NFC Champions team are found here in glorious living color. Cards were printed on soft white cardstock with semi-gloss fronts. A large action photo dominates the front of each card, while the backs feature a football and safety tip that relate to each other. Cards are not numbered except for player uniform numbers found on the lower left fronts. The set was sponsored by the local Kiwanis Club, Law Enforcement Agencies and the Rams. 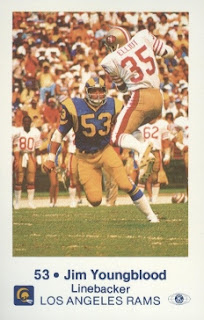 The club fielded a solid offense, lead by quarterbacks Pat Haden and Vince Ferragamo -- both of whom are featured in the set. Slashing rusher Wendell Tyler, who led the team in rushing during the '79 campaign, is also represented. L.A.'s defense fared even better, with Hall of Fame defensive end Jack Youngblood and crew wreaking havoc on any and all comers. The squad was responsible for snagging three Terry Bradshaw interceptions during Super Bowl XIV, and would put up a heck of a fight until the fourth quarter. In the end, the Rams would succumb to the mighty Steelers, whose late-1970s roster is widely considered the best in NFL history.

Police sets from the 1980s rank highly among my personal favorites, and this gem of a set certainly qualifies as a must-have. Though the cards were originally handed out by police officers on a one-player-a-week basis, complete sets in nice condition can be found with a little bit of looking. A fair current value for a NRMT complete set is in the $15 range.

Random Fact: Malavasi would go on to coach briefly in the rival USFL with the Oakland Invaders and Los Angeles Express in 1984.