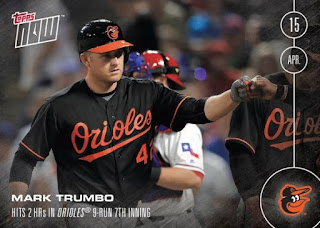 Click here for a brief description of the 2016 Topps NOW Baseball cards.

It took exactly one month for Topps to issue the first 50 cards of their inaugural "NOW" baseball set. As the owner of several of these cards, I consider myself a fan of both the look and the idea behind them.

Now that we've had a full month to watch the set unfold, we kinda have a feel for how this whole thing works... We know that a promising rookie will have a higher print run than a veteran who has a random great game. From an investment standpoint, however, the rookie cards still hold the most promise. It will be up to set collectors to drive the demand for cards featuring veteran players like Mark Trumbo and Melvin Upton Jr, even though these print runs are quite low.

Speaking of set collectors, will there be many of them? By doing a bit of simple math, we can estimate that the 2016 NOW set may feature around 300 cards by season's end. That wouldn't be considered many cards if a set were assembled from packs; but because these NOW cards are offered one at a time from Topps' website, it becomes a much more difficult and expensive proposition. Some eBay sellers have already begun to offer "bundles" of cards, as well as the chance to pick the cards you need from their list. Even so, if the average cost of each card is $7, the total cost of a 300 card set will be... Yikes. 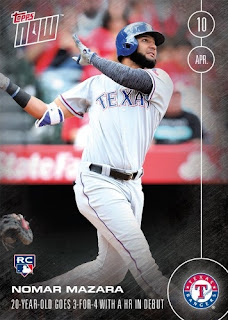 Of the first 50 cards, eleven of them feature a rookie (Trevor Story is found on four of them). As I mentioned in my original post about these cards, I purchased my first NOW cards from Topps on April 10 when they offered rookie Nomar Mazara of the Rangers. I paid my $80 for 20 of them, and three weeks later Mazara has claimed A.L. rookie of the month. While I'm not much of a speculator, I couldn't resist trying to kill two birds with one stone; Mazara provided the opportunity to both enter the NOW market at a good time and possibly provide trade bait/money for other oddball cards. As a bonus, it's a heck of a lot of fun to follow a prospect when you have a small stack of their cards lying on your desk.

The other card I've purchased directly from Topps is that of Cardinals pitcher Jaime Garcia, released on April 15. I figured the print run would be low and grabbed ten of them; Topps printed 300, which was the exact number that I predicted to be on the high end (in hindsight, I probably shouldn't have released a blog post telling everyone to buy the guy). I've purchased two additional players from the secondary market off of eBay; Chris Sale of the White Sox (244 cards printed) and Melvin Upton Jr. (226 cards printed, the lowest total so far).

In my opinion, the biggest surprise regarding any of the print runs so far features Cubs ace Jake Arrieta, who had a whopping 1,808 cards printed on April 22 -- the record thus far for most cards printed, and 164 more than teammate Kris Bryant, who was offered on the same day. Though Arrieta has had an incredible season thus far, I'm not really sure why there was such a huge run on the card. One week later, on April 29, Arrieta's second NOW card had a print run of just 365 cards... Go figure.

I always believe a person should collect what they like. I like these cards, but it seems unrealistic to acquire a complete set at this point. I know many cards will drop in price on eBay when speculators start to sell their excess stock (and they only paid $4 a card when they purchased a 20 lot from Topps). A handful of cards will increase in value over time, with the successful rookies being the most likely to do so. Hopefully Trevor Story and Nomar Mazara won't have ten different cards each by the end of the season, as this would likely dilute the values of all of them. 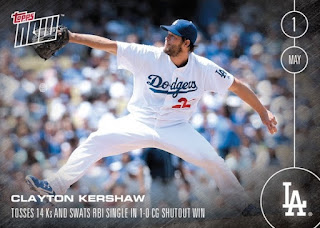