The Atlanta Falcons were a pretty good team in the late 1970s and early 1980s... In fact, the 1980 squad won the NFC West with a twelve and four record, easily making it the best season to date for a Falcons franchise that began play in 1966. Atlanta hosted the hated Cowboys in the divisional playoffs on January 4, 1981, where they wound up losing a heartbreaking come from behind thriller to Dallas, 27 to 30.

The timing was perfect for the release of the 1980 Falcons police set, which was sponsored by The Atlanta Police Athletic League, Northside Atlanta Jaycees and Coca-Cola. The set features 30 player cards, and showcases several Falcons who had been ignored by the too-small, yearly Topps football sets. Defensive backs Tom Pridemore and Kenny Johnson wouldn't get Topps cards until the 1982 season, while their backfield compadre, Rick Byas, would never get a Topps card at all (he joined the Falcons back in 1974). Longtime starting linebacker Buddy Curry would have just one Topps card issued, in 1983, even though he played for the Falcons from 1980 through 1987. Legendary offensive tackle Mike Kenn would get lots of Topps cardboard representation from 1981 through his retirement after the 1994 season, but this '80 police issue managed to sneak Kenn in a year earlier than his Topps rookie card. 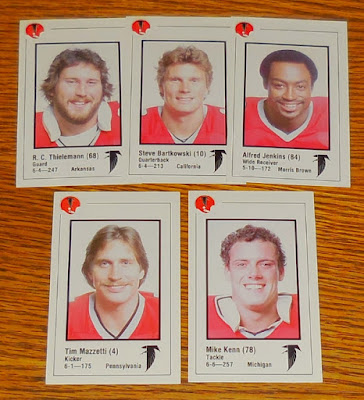 Each card front contains a large color photo portrait of a player, along with the player's name, uniform number, position, height, weight and college. A one-bar Falcons helmet is found at the top left of each card front. Backs feature  "Tips from The Falcons," as well as three red logos for the sponsors (Atlanta PAL, Northside Atlanta Jaycees and Coke). The cards are not numbered except for the player's uniform numbers.

The Falcons issued a second 30-card police set in 1981, but player studio portraits were replaced with game-day field shots. It should also be noted that the 1980 Falcons police set is considerably scarcer than the '81.

Random Thought: Three of the four players with retired Falcons uniform numbers can be found in the set (quarterback Steve Bartkowski, running back William Andrews and center Jeff Van Note). The fourth player, linebacker Tommy Nobis, retired after the 1976 season. Offensive tackle Mike Kenn's number 78, though not officially retired, has not been worn by a Falcons player since Kenn retired over 20 years ago.