Let's be clear about one thing... This set is ruled by a king boss, and his name is Mike Trout.

The DAV (Disabled American Veterans) organization began sponsoring stadium giveaway sets some time in the early 2000s. While the DAV cards given away at Major League parks typically feature current Major League players, the sets given away at Minor League parks usually feature current MiLB players in their Minors unis. In the case of the 2011 Cedar Rapids set, we are presented with a "hybrid" issue, as this set of fifteen cards showcases Kernels alumni who went on to play at the Major League level. Each player is pictured as a Kernel during their time with the A-level club. 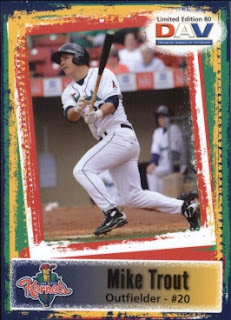 The Kernels have been an Angels affiliate since 1993, the year after the Reds organization left town. Over the past 20 or so years an impressive number of future Major League All-Stars have worn the Kernels uniform, as this set attests. Mike Trout is doubtlessly the greatest Kernel player to date, and might even be the reason that an alumni-style set was chosen (he played for the club briefly in 2009, and in 81 games in 2010). On a side note, Trout was also featured in the 2010 DAV Kernels set as an active player.

Card fronts are colorful and unique, which has been a trademark look for most DAV sets over the years. All card backs in the set are similar, with no specific details relating to the players pictured on the fronts. Each is numbered between 80 and 94, as the cards are sequentially numbered with the other Minor League sets released by the DAV that season.

The Minor League DAV sets always have modest print runs. This 2011 Kernels set was given out on Monday, May 30 (Memorial Day) at Veterans Memorial Stadium. Only 1,000 sets were printed, making this a fairly scarce prize for collectors of Trout, Kendrick, Aybar and company. Sets were originally packaged in sealed, clear plastic cello bags.

The quality controls on this release were pretty high, as the cards tend to be clean and well-centered. One pesky problem is the colored borders, which make gem mint copies of these cards virtually impossible to find even straight out of the factory cello bags (thanks to even the slightest of wear on the corners and edges). A fresh, undisturbed set is probably worth in the neighborhood of $50 or so.