For the second and final time, another set of 24 retired baseball stars was printed by a company called Sports Design Products. Released in 1985, this set shared virtually the same design as it's predecessor, which was released the year before. As far as I can tell, the only real difference in design between the two sets is that this second series was printed with red and blue backs, as opposed to red or blue backs. 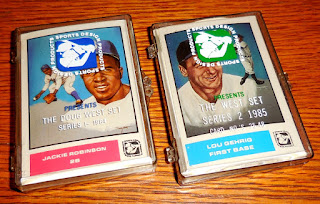 Sets were released in clear plastic boxes that were similar to the year before, complete with the SDP logo on the front. Cards in the newer set are numbered 25 through 48. Artist Doug West once again painted 24 original illustrations for this set. Being just 24 years old at the time this set was released, West remains an active sports artist today.

According to Sports Design Products, 5,000 Series II sets were released, with an additional 250 uncut sheets also being printed. As an active follower of the various uncut oddball sheets that surface on the market, I can't remember the last time I saw an uncut sheet from either of these two series available. Though the production runs for both sets are 5,000 each, it seems like the Series II set is slightly harder to find today. This doesn't translate to more dollars, however, and both sets maintain a current value in the $10 to $15 range. If an uncut sheet were to surface, I'd estimate it's value in the $20 to $30 range.

Random Fact: Five subjects in the set are pictured playing for two different teams (as noted below). 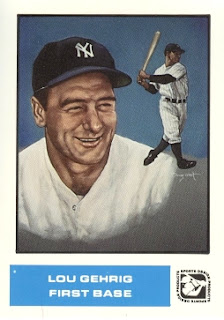