There's a good chance you wound up here on this blog because you found some baseball cards... In the group was a small box titled "Fleer 1986 Limited Edition Major League Baseball's Best," followed by "22 of the Best Sluggers and Pitchers." If that's the case, I've got some good news, and I've got some bad news.

But before I report the news, here's a brief history of these types of small baseball boxed sets that were sold in retail stores. In 1982, Topps and K-Mart partnered to release a 44-card boxed set in honor of K-Mart's 25th Anniversary. Initially snapped up by speculators at the time, Topps ran the presses overtime and eventually printed more sets than could ever be sold; because of overproduction, the K-Mart set can usually be found at the cost of a dollar or less today. It was about four years later, in 1985, when three more boxed sets showed up on retailer shelves... A 44-card "All-Time Home Run Kings" set was produced by Topps for Circle K, a 44-card "All-Time Record Holders" set was issued by Topps for Woolworth's, and a 44-card "Limited Edition Baseball Superstars" set was created by Fleer for several different retail chains. Dozens of similar boxed sets would be released from 1986 until 1990, with the final hurrah being the 1991 Topps/Toys R Us Baseball Rookies set. Collectors had shifted their focus to the premium card market by this point, and the era of small, co-branded, retail boxed sets had come to a perfunctory end.

Here's the good news for owners of the 1986 Fleer Baseball's Best set... It's really a cool little issue that features most of the big stars of the day. Boggs, Brett, Clemens, Reggie, Ripken Jr., Rose and Seaver are just a few of the big names you'll find inside that colorful box. Another neat point that has been lost over time is how the set features four young prospects who are pictured before or during their rookie card year. Oakland slugger Jose Canseco is represented here during his rookie card year, while San Francisco first baseman Will Clark, California first baseman Wally Joyner and Texas pitcher Bobby Witt are all included a full year before their true rookie cards were printed. Though none of these four players will end up in the Hall of Fame anytime soon, each of them enjoyed solid success in the Majors for many years afterwards.


So, what is the value of a set like this? Well, that's kinda where the bad news comes in. Like the K-Mart set mentioned above, the presses rolled long and often on these cards. The demand for these kinds of boxed sets have never bounced back, and probably never will. These days you can grab a set off of eBay for two to four dollars, and a searcher can often find an example bundled in a lot with several other similar types of sets at bargain basement prices.

And so goes the world of oddball card collecting. Collectors will always be interested in sets of all shapes and sizes, but the value always ultimately boils down to supply and demand. In the case of most sets printed during the 1980s, including all of these neat little boxed sets, today's supply exceeds today's demand by an awful lot. 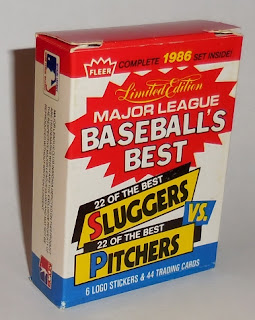