When your favorite team played the Steelers in the mid-1970s and early 1980s, the end result probably wasn't a favorable one for the ___________ (insert the name of any team that isn't the Steelers). 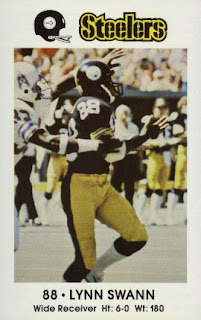 The 1981 set is the first of a long line of yearly Steelers police sets that changed very little for over a decade... And this first set appeared none too soon, as the Steelers dynasty was coming to a close. Consisting of 16 player cards, every player mentioned above is featured in this remarkable issue. Card fronts feature a Steelers helmet and "stenciled" team name across the top. with a large action photo adorning the middle. Below each photo is the player's name, position, height and weight. Backs have a Coca-Cola and Kiwanis logo at the top, with a "Steeler's Tip" occupying the middle. The set sponsors are listed at the bottom (the local Kiwanis Club, Coca-Cola, the local Police Department and the Pittsburgh Steelers). Cards are not numbered except for uniform numbers on the fronts.


Because of the high-profile status of these players, most were well-represented in the yearly Topps football sets. One exception is legendary wide receiver Lynn Swann, who decided not to sign with Topps after the 1977 season (he is found in Topps sets from 1975-1977). He makes a welcome appearance in the Steeler's first police set four years later, and makes his final appearance in the second police set released by the team a year later in 1982.


I would challenge anyone to find a team set containing at least 16 cards where over half of the players are in the Hall of Fame. It's a fool's errand. For this reason alone, you need to own this set (you'll be a huge hit with the ladies at your next party when you whip out this baby.... women love winners!) The cards aren't impossible to find, but these '81s are probably a touch scarcer than the police sets the Steelers would release in the years following. Expect to pay around $15 for a set that's in nice shape.

Random Fact: Larry Brown was converted from tight end to offensive tackle before the 1977 season began, but is mistakenly listed as a tight end in this set.