Donruss released a yearly oddball baseball "All-Star" set from 1983 through 1989. These cards were separate from Donruss' regular yearly baseball sets and were issued in their own packs. The inaugural issue, featured here, consists of 60 oversized cards that measure 3 1/2" by 5". Fifty-nine players and a checklist card comprise this gem of a set, which has a horizontal, two-photo format on the fronts. Backs are printed in black and red, and feature player statistics and biographies. The cards are numbered. 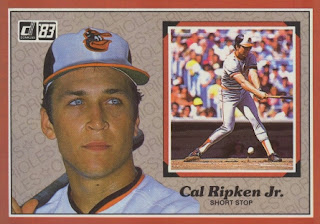 The focus of the set happens to fall upon a host of seasoned veterans, though a young Cal Ripken makes an appearance one year after the release of his rookie card (Donruss didn't choose the most flattering action photo for young Cal... He's pictured hitting the ball about as far as my daughter did when she was five). Johnny Bench and Carl Yastrzemski are represented in their final All-Star Game, with Yaz first suiting up for the Red Sox back in 1961. A good twenty Hall of Fame players have cards in the set, with Pete Rose, Dale Murphy, Dave Concepcion and Keith Hernandez following right behind.


There has been very little collector interest in the set since the day these cards first hit the shelves over 30 years ago; larger-sized cards like these are typically shunned by the average hobbyist. Donruss later went on to produce their 1988 and 1989 All-Star sets in the standard 2 1/2" by 3 1/2" size, but a lack of hot rookies and prospects all but insured the cold reception that those cards also received.

The '83 Donruss Action All-Stars set isn't hard to find today, and an unopened box of packs should only cost around ten bucks or so. A complete set is valued in the $3 to $5 range.

Random Fact: Detroit Tigers left fielder Larry Herndon appears in the set on card number five... And we have no idea why. Herndon enjoyed a solid fourteen-year Major League career with the Cardinals, Giants and Tigers, but was never an All-Star according to Baseball-Reference.com and Baseball-Almanac.com.