The Chicago Bears were woefully underrepresented in the 1980s oddball set world. During the decade, the team would be the subject of a mere two police sets -- a remarkable, action-packed set released in 1981, and a set in 1986 that featured both Bears and Patriots players, in honor of their meeting in Super Bowl XX. This post will focus on the 1981 release.

Modern-day football police sets were first released during the 1979 NFL season, with the Cowboys, Chiefs and Seahawks issuing small sets in their respective home areas. A few more teams followed suit in 1980, with Chicago hopping on board the safety card bus in 1981. Considered a mid-sized police set at 24 cards, fronts feature game-day action shots taken by team photographer Bill Smith, who continues to retain his legendary Bears pic-takin' position to this very day. The cards are not numbered except for player uniform numbers on the fronts, found at the bottom with player names, a small Bears helmet, and Kiwanis Club logo.

The Bears weren't a great team in 1981, finishing at the bottom of the NFC Central Division with a 6 and 10 record. Regardless of their pesky win-loss totals, the club (and this set) featured many names that are still beloved by Bears fans. While it's tempting to do a write-up for each and every player, here are five notable guys who make this police issue a must-have for any football collector: 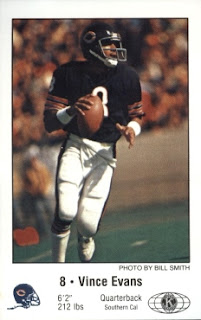 Quarterback Vince Evans - Pictured the same year as his Topps rookie card, Evans was originally drafted by the Bears in the sixth round of the 1977 NFL Draft. An exciting player to watch, Evans managed to play NFL football through the end of the 1995 season (with two years away to play USFL ball in 1984 and 1985).

Running Back Walter Payton - Precious few oddball cards were created for Payton during his playing career, and this ranks as one of the nicer ones. A struggling offensive line hampered Payton's performance in 1981, and though he gained an impressive 1,222 yards rushing that season, he averaged only 3.6 yards per carry.

Strong Safety Gary Fencik - Decorated defensive back Fencik was a mainstay with Chicago from 1976 through 1987, and was the team's starting free safety throughout the 1985 playoffs and Super Bowl XX. A huge fan-favorite and Chicago native.

Defensive Tackle Alan Page - One of the greatest defensive linemen ever to play professionally, Page played his first eleven and a half pro seasons with the Minnesota Vikings. He finished his career with the Bears, where he played another three and a half years. I believe this '81 Bears police card is the final issue printed during his active playing career.

Defensive End Dan Hampton - Chicago's first-round pick in the 1979 NFL Draft, Hampton is represented during his Topps rookie card year. A member of the Pro Football Hall of Fame, "Danimal" was a fixture on the Bears defensive line from 1979 through 1990.

These sets aren't everywhere, but I wouldn't consider them scarce either. A nicely centered, NRMT set is worth in the neighborhood of $20 to $25. Anyone who collects oddball football sets should have this one in their sights.

Posted by Anthony Nunez at 5:41 PM