The 1988 AAA All-Star game was played in Buffalo, New York on July 13, and this nifty set of 55 cards was on site in time for the event. That's right, these sets were available right at the ballpark the day of the game. Featuring player statistics that were current through June 28 of that same year, the information given on card backs was just over two weeks old from the day of the game -- something that was quite a feat for any card maker in 1988. Only three players who participated in the game are missing from the set, as they were late replacements and not added to the rosters until just a few days beforehand.

The set was printed on thin, white cardstock and features glossy fronts. Large color photos across the fronts are flanked by dark blue borders and a large All-Star Game logo at the bottom left. Short player bios and hitting/pitching stats are found across the backs, which are numbered AAA-1 through AAA-54. A header/checklist card is included in the set, but is not numbered. 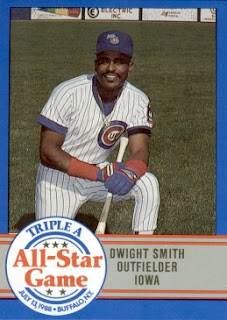 Several promising youngsters were featured in the set, and most of the players would go on to spend at least a short time in the Majors. The biggest name by far (at the time) was Tidewater infielder Greg Jefferies, who would go on to have a productive fourteen year career in the bigs, but didn't really hold up to the superstar tag he was given early on. Iowa outfielder Dwight Smith would go on to place second in the 1989 NL Rookie of the Year race, just behind fellow Cubs teammate Jerome Walton. Rochester outfielder Steve Finley is perhaps the most underrated player in the set, as he went on to play an incredible nineteen seasons in the bigs. Finley collected 2,548 hits during that time, and also clubbed 304 homers, smacked in 1,167 RBIs and stole an impressive 320 bases. Sandy Alomar, Mike Bielecki, Joey Cora and Mike Devereaux are four other players who enjoyed productive careers at the major League level.

In a nutshell, the 1988 Procards AAA All-Star set features several solid names that would impact Major League Baseball throughout the 1990s and beyond. The design is good, the photos are okay and the overall effort is ambitious. A complete set still sealed in plastic should cost a collector no more than five dollars today.

Posted by Anthony Nunez at 2:49 PM